North Korea’s abrupt postponement of high-level talks with South Korea and its threats to call off the upcoming summit with the US are tactics to strengthen its position in negotiations with Washington, experts say.

With the US appearing to be raising the bar for North Korea’s denuclearization, North Korea might be expressing its discomfort and sending a message that it will not be swayed by Washington and Seoul ahead of the North Korea-US summit on June 12 in Singapore.

North Korean Vice Foreign Minister Kim Kye-gwan on Wednesday said that the North would reconsider the summit with the US if Washington pushes Pyongyang into unilaterally abandoning its nuclear arsenal.

“If the US is trying to drive us into a corner to force our unilateral nuclear abandonment, we will no longer be interested in such dialogue and cannot but reconsider our proceeding to the DPRK-US summit,” Kim said, using the North’s official name, the Democratic People’s Republic of Korea.

The statement came hours after the North abruptly delayed high-level talks with South Korea on Wednesday, citing ongoing joint military drills between South Korea and the US. The North denounced the annual air combat drills as a “rude and wicked provocation.” 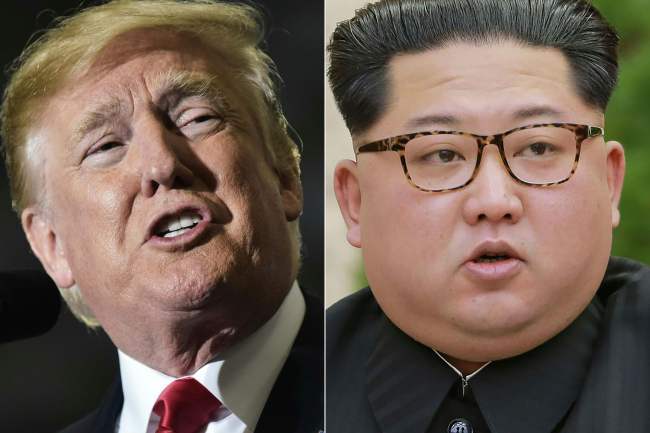 It marks a shift in tone, after months of the two countries’ diplomatic efforts to achieve “complete denuclearization” of North Korea. North Korea said it would shut down its major nuclear site next week and disclose the process to the international community.

Pyongyang’s threat to cancel the upcoming meeting with Washington could be a sign that ongoing clandestine discussions to set the agenda for talks and a time frame for North Korea’s denuclearization are not going very well.

“Behind-the-scenes talks between the two countries might not be going very well,” said Ko Myong-hyun, a researcher at the Asan Institute for Policy Studies.

“It is possible the US has demanded an intrusive inspection of its nuclear sites and facilities which the North cannot accept, or delayed giving sanctions relief until after the North substantially denuclearizes.”

The US’ possible easing of sanctions against the North has been seen as a key economic reward that could be given to North Korea, whose economy has been hit hard by multilayered sanctions over its pursuit of nuclear and missile programs.

But the US has been clear that it will lift sanctions against the reclusive regime after it substantially dismantles its nuclear weapons programs.

The North’s senior diplomat said in the statement, “We have never sought economic development by pinning expectations on the US and such a deal will never happen going forward either.”

The North’s move could also be taken as expressing displeasure over John Bolton, Trump’s national security adviser, who has been seen raising the bar for North Korea’s denuclearization and has openly endorsed the “Libyan model” for the reclusive regime.

Since returning from North Korea with three freed hostages, US Secretary of State Mike Pompeo has been positive about the North’s willingness to denuclearize.

Bolton, however, struck a different tone, specifying possible plans for the North’s denuclearization and bringing up agenda items other than the dismantling of the North’s nuclear weapons programs.

“North Korea is expressing its complaints about the Trump administration’s officials,” said Kim Dong-yub, a professor at Kyungnam University’s Far East Institute, referring to Bolton insisting on Libya-style denuclearization for North Korea and vowing not to give any economic rewards to the North unless it completely denuclearizes.

North Korea is worried about the US seemingly broadening agenda items to be discussed during the upcoming summit, another expert said.

“I think John Bolton went too far by mentioning agenda items that could provoke North Korea -- such as biological and chemical weapons, as well as human rights,” said Hong Min, a senior researcher at the Korean Institute for National Unification. “Taking issue with human rights in North Korea is seen as an insult to its leader Kim Jong-un and his regime’s dignity.”

“Bolton is making North Korea look like it is giving in to the US and agreed to give up everything,” he said. “Kim already feels insecure about holding a summit in a third country -- Singapore -- not in Pyongyang. I think North Korea felt the need to narrow the focus of agenda items to be discussed during the North Korea-US summit.”

“North Korea is warning the US that it should not further force the country to give up more than it offered to give up.”

The experts, however, said that the US-North Korea summit will likely go ahead as scheduled.

“I don’t think North Korea will cancel the North Korea-US summit,” he said. “It is more like … North Korea is asking President Moon Jae-in to persuade Trump to reflect more of its demands and play a mediating role.”

Moon and Trump are set to hold a summit on May 22 in Washington.

As for postponement of high-level talks with South Korea, the joint military drills might be a good excuse and the move signals the North’s discomfort about the South Korean government’s lack of action to contain criticism being raised against the Kim Jong-un regime, said another expert.

On Monday, Thae Yong-ho, North Korea’s former deputy ambassador to the UK, said it is impossible for North Korea to completely denuclearize as demanded by the US unless the regime collapses or changes.

Thae, who defected with his family to South Korea in 2016, held a press conference to introduce his newly-published book, titled “The Password From the Third Floor.”

In the KCNA article threatening to cancel the summit, it criticized the South for “allowing even human scum to brazenly hurl mud at the dignity of the supreme leadership of the DPRK and its system and play down the Panmunjom Declaration in front of the building of the ‘National Assembly’.”

“North Korea is a nation that places its utmost value in regime and its dignity, which is why it probably sent a message to the Moon Jae-in administration on the lack of action against those criticizing the regime,” Yang Moo-jin, a professor at the University of North Korean Studies, said.