The SKT affiliate launched Giga Premium, a new internet service for commercial buildings and households, which is applied with the latest gigabit passive optical network technology.

Known as G-PON, the technology does not require additional installations of cables to provide such fast internet speed, according to the company.

When using multiple mobile devices at a single house, each device can have up to 1 Gbps internet speed. 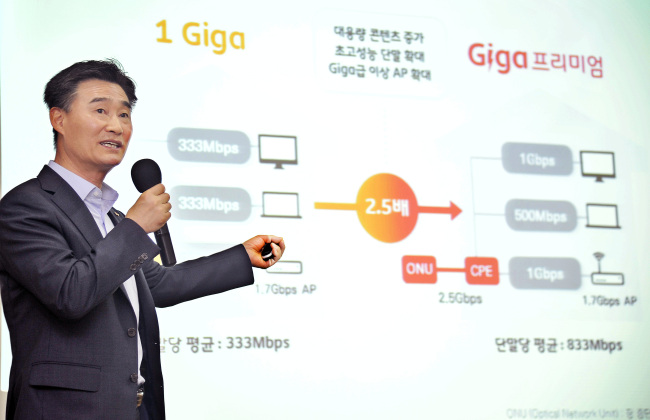 Yoo Ji-chang, head of internet infra unit at SK Broadband, speaks during a press conference to announce the launch of Giga Premium at the company‘s headquarters in central Seoul on Thursday. (SK Broadband)

By SK Broadband’s estimation, three devices connected to Giga Premium at a single household can download a 1.5-hour UHD movie in less than three minutes each.

The company also highlighted it is preparing to launch 5 Gbps and 10 Gbps internet services in the second half of the year, and has been testing the service in some areas in Seoul and Anyang, Gyeonggi Province.