[ The Korea Herald – Send E-mail ]
Six S. Koreans remain imprisoned in NK
By Jung Min-kyung
Published : May 9, 2018 - 16:43
Updated : May 9, 2018 - 20:49
With US Secretary of State Mike Pompeo’s visit to Pyongyang fueling hopes of the possible return of three detained US citizens, speculations about the status of South Koreans detained by the North are rising.

At present, six South Korean nationals are known to be kept by the North Korean regime.

According to Seoul’s Ministry of Unification, three are Christian missionaries accused of espionage and subversion against the communist nation. 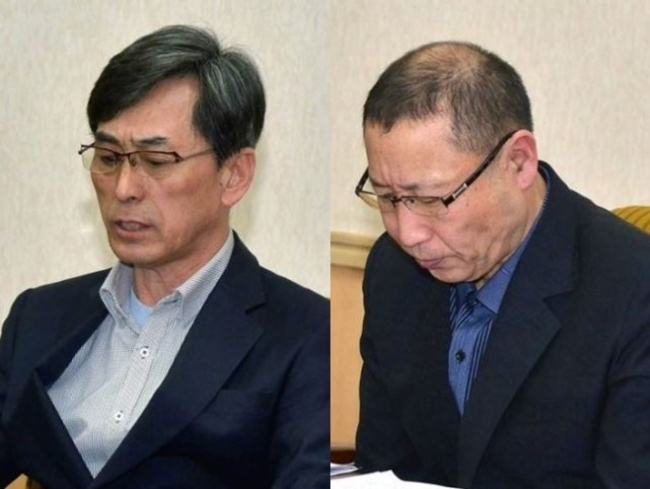 South Korean missionaries Kim Kuk-gi (left) and Choe Chun-gil (right) who are currently believed to be detained in North Korea on charges of espionage against the North. (Yonhap)
The detained missionaries are pastors Kim Jung-wook, Kim Kuk-gi and Choe Chun-gil who were sentenced to hard labor for life. The other three are North Korean defectors who were kidnapped by Pyongyang near the border between North Korea and China, and brought back to their homeland against their will.

Also unresolved is the issue of those kidnapped by the North decades ago. There are about 516 South Koreans who were abducted in the aftermath of the 1950-53 Korean War, according to the Unification Ministry.

“It’s been nearly 50 years since my father was abducted by North Korea and I haven’t heard anything from him since then,” Choi Sung-ryong, who represents the families of those abducted by the North, told The Korea Herald.

Choi, who is also a South Korean activist, had previously confirmed to the media that the three US detainees had been relocated from a labor camp to a hotel, citing an unnamed source in Pyongyang.

“I just hope the release of the US detainees could lay the groundwork for not only the six South Korean detainees, but also those who we don’t know whether they are dead or alive,” Choi said.

Experts are optimistic on the North’s release of South Korean detainees, saying that the issue is likely to be discussed in the coming weeks.

“Though it won’t be treated as a main agenda (item), the issue is likely to be discussed at an upcoming high-level meeting between the two Koreas,” he added.

US detainees in North Korea have always been a humanitarian concern for Washington, but the death of American student Otto Warmbier -- who died days after returning to the US in a state of coma in July 2017 -- sparked a new level of concern and outrage among the international community.

Warmbier’s parents claimed that their son was “brutally tortured and murdered” by the North Korean regime. He was arrested by North Korean authorities in January 2016 for stealing a propaganda poster and sentenced to 15 years in prison with hard labor.