The new Saturday-Sunday series features actors Lee Joon-gi and Seo Ye-ji as the main leads. Lee is to play a gangster-turned-lawyer who seeks revenge against the powerful. The story takes place in the fictional city of Kisung, where corruption is rampant. 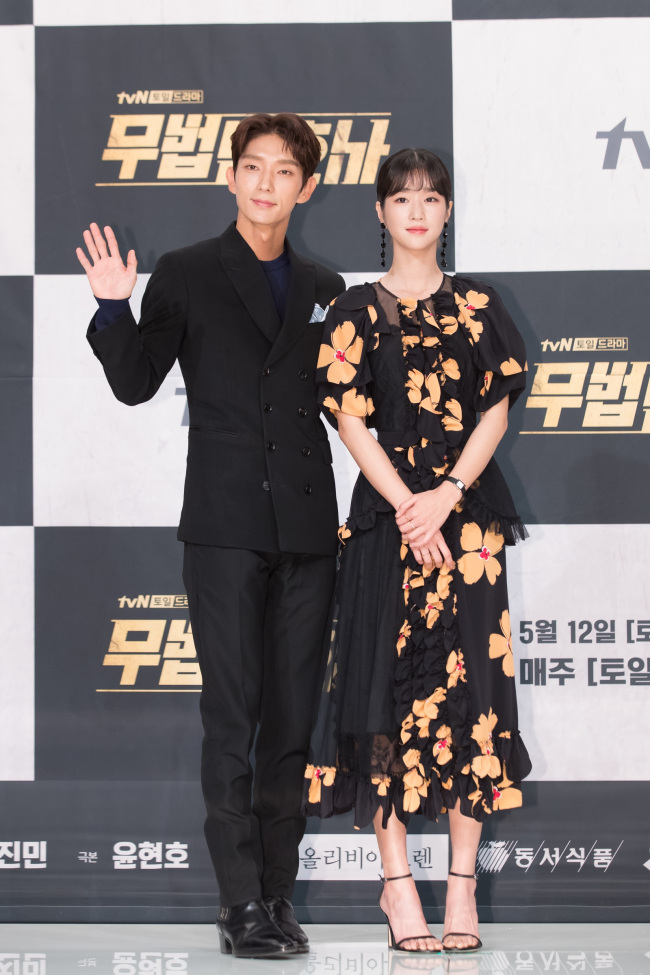 Lee Joon-gi and Seo Ye-ji pose for photos at a media briefing held Tuesday at Times Square mall in Yeongdeungpo-gu, Seoul. (tvN)
“The story isn’t just about a revenge,” director Kim Jin-min said at a press event held Tuesday in western Seoul. “While the plot centers on the subject of revenge, it actually hopes to depict relationships of the people and how they change.”

The new 16-part series is garnering much anticipation as it is actor Lee and director Kim’s second work together. Their previous work together was for the hit series “Time Between Dog and Wolf” in 2007.

“I am working with Lee for the first time in 11 years. He is still as passionate as he was before. But he has become flexible and listens to others,” Kim said. “He has become a star, but he still knows how to care for others.”

Playing the role of an ex-gangster, Kim performs numerous action scenes. The actor is known for continuously playing hard-boiled characters.

“I am attracted to characters who go through hardships,” he said. “Being 37, I would like to do ‘physical acting’ as long as I can. I am confident about it too.”

Actress Seo also performs action scenes, playing a lawyer who finds it hard to control her temper. Her character is suspended from practicing law for hitting a judge in court.

“As my previous works were gloomy, I was looking for a different type of character,” she said. “I was first worried about being shadowed by others as the series is an action genre. But on the set, actresses are spotlighted as well, for which I am grateful.”

The first episode of “Lawless Lawyer” will air Saturday at 9 p.m.