[ The Korea Herald – Send E-mail ]
Comforting life through meeting ‘My Mister’
IU admits Lolita complex controversy follows her
By Im Eun-byel
Published : Apr 12, 2018 - 17:11
Updated : Apr 12, 2018 - 17:11
Drama series “My Mister” didn’t get off to a smooth start, being hounded by controversies from the very beginning. At a media briefing held Wednesday, the producer and cast attempted to dispel concerns about the program, appealing to the public to see its sincerity.

The tvN drama that airs at 9:30 p.m. on Wednesdays and Thursdays aims to portray how scarred souls heal each other, focusing on a relationship between a man in his mid-40s and a woman in her early 20s. 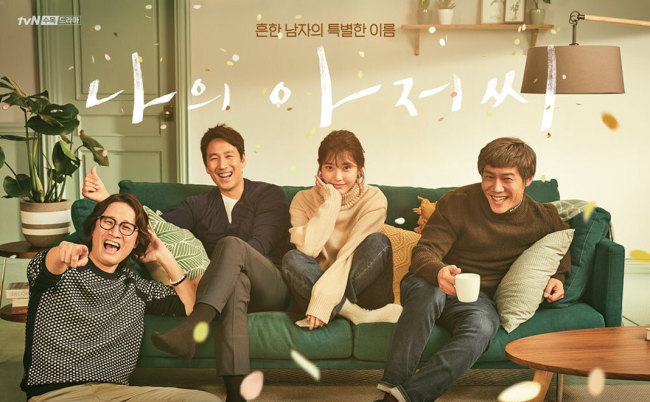 Poster of “My Mister” (tvN)
The drama was criticized for setting up a couple with a 20-year age gap. With singer-actress Lee Ji-eun, better known by her stage name IU, taking the role of the 21-year-old woman, the controversy only deepened. Lee had already been mired in controversy for using the Lolita complex as a concept, particularly in her self-produced album “Chat-shire” in 2015. Despite her attempts, Lee has never been fully able to shake off criticism of impropriety.

Lee admitted that she was concerned when offered the role, as it seemed likely to revive the old controversy. She said she hesitated in accepting it.

“After reading the synopsis, I wanted to take the role. But I couldn’t readily say ‘yes,’ as I was worried that the drama might be swept up in unnecessary controversy because of me,” she said. “I even asked the producer if he knows about the controversy surrounding me, if he would be OK with it.”

Producer Kim Won-suk managed to persuade her, stressing, “It’s not a love story, but a human story.” Speaking about his female lead, tears fell down the producer’s cheeks -- perhaps grateful to the actress, perhaps feeling sorry for her, too. 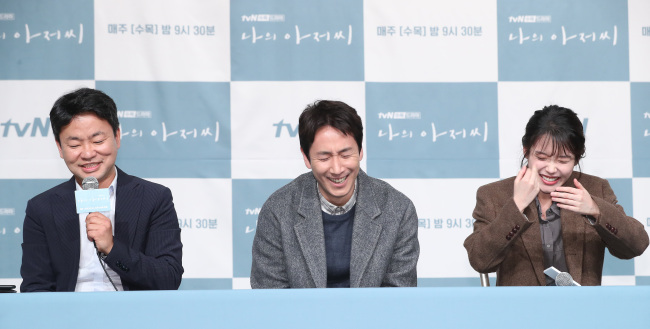 (From left) Producer Kim Won-suk, actors Lee Sun-kyun and Lee Ji-eun speak at a press conference held Wednesday at Times Square mall in Yeongdeungpo-gu, Seoul. (Yonhap)
“I have to thank her very much for playing the role well. The Lee Ji-ahn (Lee’s role in the drama) that actress Lee Ji-eun plays, is better than the one I prepare. She greatly contributes to the drama,” he said.

To fend off possible criticism, the production team has paid extra attention to self-censoring some of the more provocative scenes. Though he is not fully content with the moves, the producer said it was necessary to achieving the drama’s original goal -- redefining the word “mister,” or “ajeossi” in Korean.

“In recent years, the word seems to have come to have a negative meaning, making me wonder why. Through the drama, I hope to redefine the word and change its image,” Kim said.

Kim also said the character played by Lee Sun-kyun, Lee Ji-eun’s “ajeossi,” is a reflection of himself.

“The relationship between the two (main characters) is very odd,” he said, adding that such a relationship would typically be seen as inappropriate. “But we wanted to make viewers understand that the two become important for each other.”

The producer who has directed hit series such as “Misaeng” and “Signal” said he is satisfied with the current series, having received more calls than ever from industry insiders complimenting him. He thinks “My Mister” has a unique, “previously unseen” female lead character.

“Lee Ji-ahn is very dark. In many Korean dramas, female characters are often projections of the viewers. But Lee is too dark for that, hard to understand, too,” Kim said.

Though the drama has a dark atmosphere, the producer considers it a comedy. “Comedy is what I would like to produce, but also it is the hardest to make. But essentially, ‘My Mister’ is a comedy, as it finds happiness in a tough life,” he said.

Eight more episodes remain of the 16-episode series. It has so far garnered an average viewership rating of 4.5 percent.