The 63-year-old man is accused of kidnapping, killing and eating a 2-year-old Welsh corgi.

Police said Tuesday that they received a call Monday from a woman in her 30s who said that she had “lost her pet dog” and that “there is a man who eats dogs.” 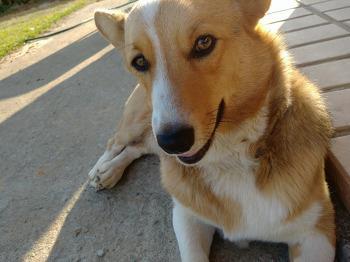 The 2-year-old Welsh corgi. Photo courtesy of dog owner. (Yonhap)
The woman reportedly lost her dog on March 4 in Cheongbuk-eup, Pyeongtaek. She offered a 1 million won ($940) reward to find her missing dog and put up a large banner along a road. She called the police after a neighbor’s tip-off regarding a “man who eats dogs.”

The suspect admitted to police that he strangled the dog to death with an electric wire because it was “barking too loudly.” The man, however, denied eating the dog himself, claiming that he “shared the dog meat with other people.”

Police plan to book the man on the charge of property damage.