Mounting criticisms against the integrity of the newly appointed financial market watchdog chief is adding extra burden on the Moon Jae-in administration, which has vowed to eradicate “accumulated evil practices” and to restore trust in the nation’s public functions.

The scandal concerning the new FSS chief put the presidential office Cheong Wa Dae and the ruling Democratic Party of Korea in an awkward position, as Kim’s predecessor Choe Heung-sik had just made a hurried exit amid a hiring irregularity scandal. 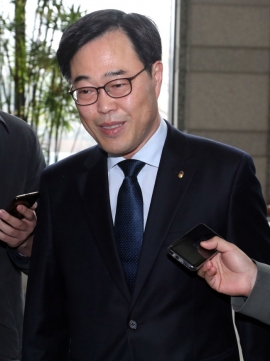 “The (disputed) business trips involved official agendas,” Kim told reporters on his way to the office, denying speculation that the trips had been offered as kickbacks in exchange for favors.

“But I do accept the criticism that (the trips) were inappropriate in the public’s perspective and (for this) I apologize.”

Kim, who took office as the head of the FSS on April 2, has been under fire for trips paid for by the Korea Exchange, the Korea Institute for International Economic Policy and Woori Bank in 2014 and 2015. He was at the time lawmaker of the then-opposition Democratic Party and member of the parliamentary National Policy Committee, in charge of monitoring the operations of financial institutes including the three trip sponsors.

Connecting the FSS chief’s past alleged misdeeds to the watchdog’s failure to prevent the latest Samsung Securities’ system error, the opposition parties called either for Kim’s voluntary resignation or the withdrawal of his resignation.

“Gov. Kim remains engrossed in his prerogatives. President Moon must withdraw his designation of Kim while the prosecution must launch an investigation,” said Rep. Kim Sung-tae, the floor leader of the main opposition Liberty Korea Party during a party meeting.

He also took issue with the defending comments by the FSS chief, who had said in his official apology Sunday that he did not give favors to the corresponding institutions in return for the travel expenses. The remarks stoked additional debate by seemingly admitting to the trip sponsors’ lobbying intentions.

“Kim should step forward before the people and face legal judgment, instead of hiding behind excuses,” Rep. Kim said.

But later in the afternoon, Cheong Wa Dae shot down the claims.

“Though we embrace the public’s criticism, (the dispute over the trips) is not reason enough to dismiss (Kim from his post),” said presidential spokesperson Kim Eui-kyeom in a press briefing.

The presidential office also denied the speculations that the lack of a certificate of appointment from President Moon signaled a possible dismissal.

“The FSS governor‘s term in office takes effect without certificate as the post has already been confirmed upon the motion by the Financial Services Commission chairman and approval by the president,” a Cheong Wa Dae official told reporters.

While the governor was largely expected to speak at a press conference in the morning on the special investigation into Samsung Securities’ latest trading chaos, the event was instead led by Senior Deputy Gov. Won Seung-yeon who is in charge of supervising financial investment services.

Meanwhile, a survey by local pollster Realmeter showed Monday that President Moon’s approval rating had slipped by 1.4 percentage points from the previous week, amid the FSS chief scandal over the weekend, tallying at 68.1 percent.