The United Kingdom’s diplomatic missions around the world and the public take part in the Sport Relief event biannually for charities of various purposes.

This year, as part of the campaign, the local embassy staff and North Korea defectors played a friendly soccer match at Seoul Foreign School with the money raised going to the Eugene Bell Foundation -- a charity that sponsors programs, projects and exchanges in North Korea with a particular focus on medicine and the diagnosis and treatment of Tuberculosis. 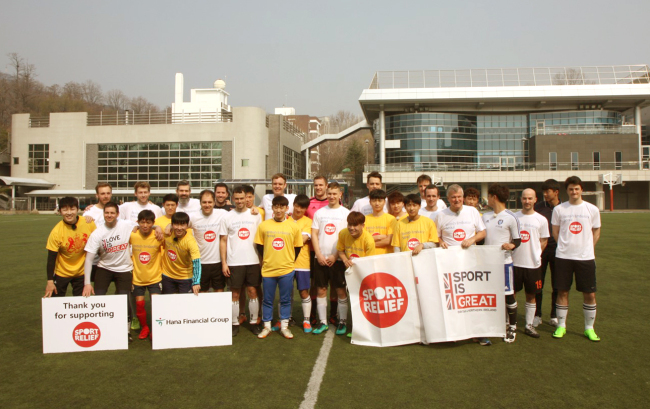 British Embassy staff (in white uniforms) pose with North Korea defectors (in yellow) before a friendly soccer game Saturday at Seoul Foreign School. (British Embassy).
“Sport is inspirational. It breaks down barriers and brings people together, as we saw during the successful PyeongChang Winter Olympics and Paralympics,” said British Ambassador to Korea Simon Smith, who participated in the game. “The British Embassy is delighted to bring together a team of British nationals and North Korea defectors for a Sports Relief game of football to raise money for charity.”

Those interested in donating can visit www.justgiving.com/fundraising/sportreliefbeseoul. The embassy also has a collection box at Broughton’s bar inside the compound. Those with ideas about raising money or contributing through other means can email mike.welch@fco.gov.uk.