South Korean President Moon Jae-in and Crown Prince of Abu Dhabi Mohammed bin Zayed Al-Nahyan agreed Sunday to upgrade their countries' relationship to a "special strategic partnership," possibly paving the way for a boosting of their ties and economic cooperation to the level of allies.

In a bilateral summit, the two leaders also reaffirmed their agreement to launch regular talks between their senior foreign and defense officials, known as the Two Plus Two Dialogue, along with a new strategic dialogue between their foreign ministers, according to the South Korean presidential office Cheong Wa Dae. 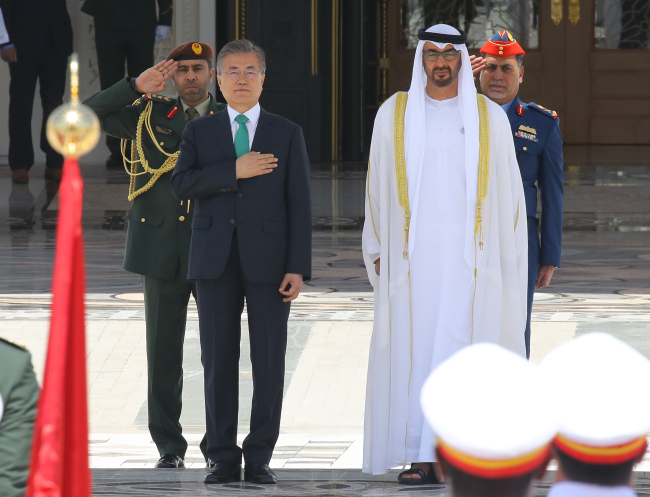 Moon arrived here Saturday on a four-day official visit. It is his first trip to the Middle Eastern country since taking office in May 2017. South Korea and Abu Dhabi established diplomatic ties in 1980. The bilateral relationship was upgraded to a strategic partnership in 2009, shortly after Seoul secured a project worth nearly US$19 billion to build four nuclear reactors in Barakah, UAE.

The Crown Prince of Abu Dhabi said the countries' relationship remained strong and special but that the countries must further improve them.

"As you may well know Mr. President, the relationship between our two countries is already very strong and special," he said through his interpreter at the start of the summit.

"However, I hope the two countries will not be satisfied and will endlessly study ways to further develop their relationship," the Crown Prince told Moon, according to Cheong Wa Dae pool reports.

The South Korean leader said he was glad to have a chance to personally discuss ways to improve the countries' bilateral ties with the UAE leader.

They agreed to expand the countries' cooperation to new areas, according to Cheong Wa Dae.

"The two leaders noted the countries have built an exemplary cooperative relationship in various areas, including not only the energy and infrastructure sectors but also the defense, weapons industry and health and welfare sectors," the press release said.

"Considering that the UAE is actively pushing for a post-petroleum strategy, they agreed to expand the countries'

practical cooperation in new and future-oriented industries that may help create high value-added industries in the fourth industrial revolution," it added.

President Moon also expressed satisfaction that many South Korean businesses were currently taking part in UAE's energy development projects, and he asked for the Crown Prince's additional support for and interest in South Korean firms here.

Shortly after their summit, the two leaders attended a signing ceremony for five new memoranda of understanding between their countries. They included an agreement signed by the countries'

Moon will travel to Dubai on Tuesday for a meeting with Mohammed bin Rashid Al Maktoum, ruler of Dubai and prime minister of the UAE, according to Cheong Wa Dae.

He will head home Tuesday. (Yonhap)