[ The Korea Herald – Send E-mail ]
Location of planned inter-Korean summit hints at changes in NK strategy
By Choi He-suk
Published : Mar 7, 2018 - 16:17
Updated : Mar 7, 2018 - 17:44
North Korean leader Kim Jong-un agreeing to hold the inter-Korean summit in the South Korean side of the border hints at Kim’s personality, and Pyongyang’s desire to be seen as a “normal country,” experts say.

According to Seoul’s National Security Office chief Chung Eui-yong, North Korea agreed to hold an inter-Korean summit at the Peace House, a facility located on the South’s side of the Panmunjeom truce village at the end of April. 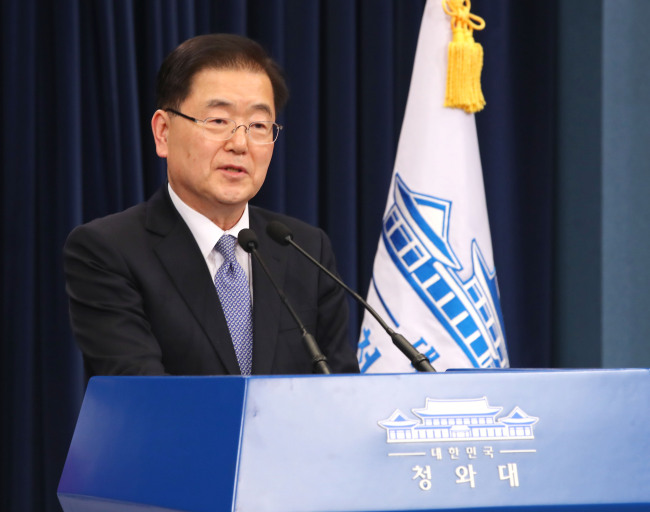 Natoinal Security Office chief Chung Eui-yong announces the inter-Korean agreement on Tuesday. Yonhap
“Panmunjeom is the symbol of division. The past two inter-Korean summits were both held in Pyongyang. (But) the third inter-Korean summit being held in Panmunjeom, at the Peace House on the South’s side, is highly significant,” Chung said on Tuesday after returning from his two-day trip to Pyongyang.

If the summit goes ahead as planned, it will mark the first time a North Korean leader sets foot on South Korean soil since the 1950-53 Korean War.

“Agreeing to hold the summit at Panmunjeom is an extremely pragmatic approach to inter-Korean summit talks,” Cheong Seong-chang of the Sejong Institute said, adding that holding the summit in Seoul or Pyongyang would require significant investment of time and resources.

“The fact that Panmunjeom has long been a symbol of conflict also shows Kim’s decisiveness and bold personality.” 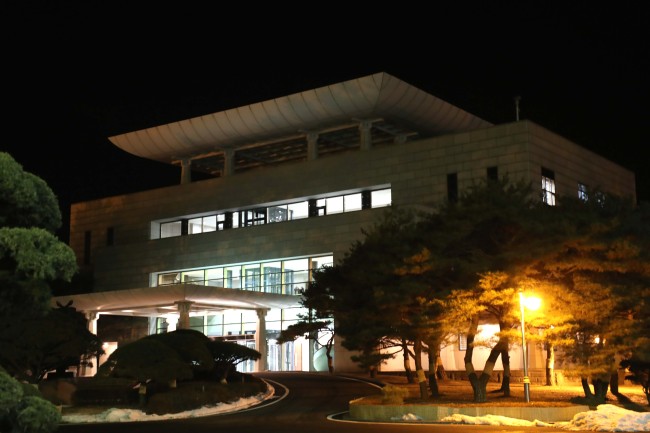 Peace House, the venue for the April inter-Korean summit located in the South Korean side at the truce village of Panmunjeom. (Yonhap)
The location of the planned summit also hints at a greater flexibility in the North’s strategy for engaging the South. During her recent visit to Seoul, the North Korean leader’s younger sister Kim Yo-jong conveyed an offer of an inter-Korean summit from her brother and invited President Moon Jae-in to Pyongyang.

North Korea has been known to call off talks, and seize South Korean entities’ assets in its territory when its demands are not met. Its representatives have even been known to walk out in the middle of a meeting with the South in protest of the topic on hand.

Experts also point to the recent rise in the status of Kim Jong-un’s wife, Ri Sol-ju, as another sign of the North Korean regime’s efforts to appear “normal.”

On Monday, Ri accompanied Kim during the welcome dinner hosted for South Korea’s special envoys in a departure from the North’s practice of keeping the ruler’s spouse out of diplomatic events. Although Ri has made numerous appearances in the North Korean media while attending domestic events, it was only the second time she was shown by Kim’s side at a diplomatic event.

In addition, the North Korean media have taken to referring to Ri by the Korean word “yeosa,” which can be loosely translated as “lady.”