North Korea is expected to hold an “intimidating” military parade on Feb. 8, a day before the opening of the PyeongChang Olympic Games, Seoul’s Unification Minister Cho Myoung-gyon said Friday.

Preparations for the parade are being made at the Mirim Airfield in Pyongyang to commemorate the founding anniversary of the North’s Korean People’s Army, according to Cho. 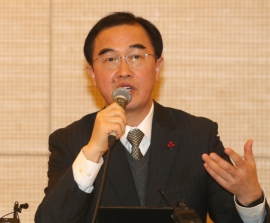 “There is a high possibility that it will be a very intimidating military parade in which North Korea mobilizes a sizable number of military personnel and almost all of its weapons,” Cho told a forum in Seoul.

The North’s official Korean Central News Agency said earlier this week that Feb. 8 would be commemorated as the country’s new Army Building Day.

“The North seems to be planning major events as the regime marks the 70th anniversary of its founding this year, and its leader Kim Jong-un apparently wants to show his absolute power,” Cho said.

Many are concerned that the North’s military parade could cast a chill upon South Korea’s endeavors to promote peace through the PyeongChang Olympic Games.

North Korea plans to send athletes, musicians, dancers, cheerleaders and high-ranking officials to the Winter Games. The two Koreas have agreed to have their athletes march together at the opening ceremony under a single flag symbolizing a unified Korea. They will also form the first unified Korean team in the Olympics, a women’s ice hockey team.

The key to continuing inter-Korean dialogue after the PyeongChang Olympics lies in whether there can be a turning point in resolving the North Korean nuclear issue, Cho said.

“Whether the US and the North can start a dialogue would be the key point,” Cho said, adding that efforts should be made to begin the talks before the annual joint military exercise between South Korea and the US.

The joint military drill is likely to take place after March 25 under the United Nations’ Olympic Truce resolution.

“The North will obviously react strongly once the joint drill resumes, then chances of a provocation will be high, and provocations will be followed by additional sanctions, repeating the vicious cycle we saw last year and the year before,” Cho said.

“We talked about this a lot during the high-level talks with the North on Jan. 9. We told them this should not happen.”

As the Koreas have resumed talks, and the North plans to send a high-level delegation to PyeongChang, Cho said he believes Seoul can help communicate between the international community and Pyongyang.