A shortened form of “swagger,” the word is used to imply a certain insolent cockiness. To help sort the swag from the square, five rappers and a funnyman will search daily life for examples in the new hip-hop reality TV show “Everyday Swag” (working title). 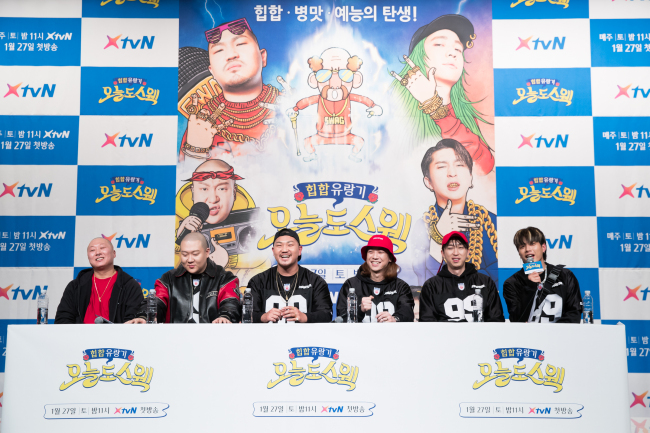 A press conference for entertainment TV show “Everyday Swag” is held at Times Square mall, Yeongdeungpo-gu in Seoul on Monday. (XtvN)
Nucksal, Don Mills, Sleepy, Deepflow, Bigone and comedian Yang Se-chan have been charged with showing viewers the secrets of swag, but surprisingly, rap battles are not included as a part of the process.

“It is a rappers’ show without rap. The cast members will be different from their cool looks onstage. It’s just a fun journey of finding swag,” said producer Jung Ho-joon at a press conference Monday at Times Square mall in western Seoul.

The rappers were fascinated by the proposal to star in a reality TV show where they don’t have to rap.

“As we are stressed and pressured when it comes to doing music, we always strive for something different,” rapper Deepflow said. “We are actually rappers who are obsessed with being funny, evaluating each other about our sense of humor.”

The eight episodes show the rappers seeking swag outside of hip-hop, after the fashion of the show’s fictional character, Mr. Swag-rovski. Showcasing their humorous sides, they try to find the true meaning of swag. Even though they are still on their journey, some of the rappers realized what swag really means for them.

“Before the program, swag was a style limited to hip-hop for me,” rapper Deepflow said. “But I realized that swag could exist everywhere. Some of the rappers were not comfortable starring in TV shows, but they challenged themselves -- that’s swag.”

Rapper Nucksal agreed, saying, “Going through other experiences than rapping, thanks to the show, is my swag point.”

The hipster show is similar to star producer Na Young-seok’s “New Journey to the West” in its format and editing style -- as it is a homage to Na.

“It’s not plagiarism but a homage. To be compared with the ‘New Journey to the West’ is an honor for me, as I respect producer Na.”

The first episode of “Everyday Swag” will air at 11 p.m. Saturday on XtvN, media mogul CJ E&M’s new variety show channel, which will be launched Friday.

The channel’s director Lee Myoung-hwan, in charge of the launch, outlined XtvN’s identity as “amusement.”

“There could be various types of pleasure when it comes to watching entertainment programs; empathy, comfort or insight. For XtvN, it’s all about amusement,” Lee said.

XtvN is targeting millennials, who tend to use multiple digital platforms to watch shows.

More shows that abandon the formulas of existing entertainment programs, are in the works, such as “Super TV,” “Keyword #BoA” and “Can Love Be Translated?”

“When tvN was first established (in 2006), it was bold and adventurous. But as it grew in size, it became hard to break free from the stability of the broadcast market. To keep up with the brand’s initial purpose, we have prepared the new channel,” Lee said.