To solve the mystery, six “hipsters” will strive to find swag in daily life through a new hip-pop reality TV show. 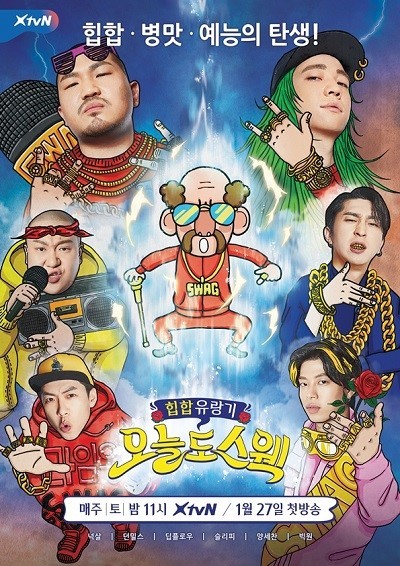 A promotional poster for "Everyday Swag" (XtvN)
Swag, a slang word, is a shortened form of “swagger,” used to imply a certain insolent cockiness. It dates back to the days of William Shakespeare. Nowadays, the word commonly refers to a sense of confidence and style.

The eight-episode show centers on the rappers’ journey to find swag out of the hip-hop zone after the fashion of Mr.Swag-rovski, the guru of swag.

“Before the program, I thought of swag as a style limited to hip-hop,” rapper Deepflow said at a press conference that took place Monday at Times Square mall in western Seoul. “But through the show, I realized that swag could exist everywhere. Some of the rappers were not comfortable starring in TV shows, but they challenged themselves -- that’s swag.”

“It is a show by rappers without rap. They will be different from their cool looks onstage,” said producer Jung Ho-joon, who showed up at the press conference in a hip-hop-style outfit.

Rapper Deepflow added, “We are rappers who are obsessed about being funny. As we are stressed and pressured when it comes to doing music, we always strive for something different.

The show is to air its first episode at 11 p.m. Saturday on XtvN, media mogul CJ E&M’s new variety show channel which will be launched Friday.

The channel’s director Lee Myoung-hwan, in charge of the launch, outlined XtvN’s identity as “amusement.”

“There could be various types of pleasure when it comes to watching entertainment programs; empathy, comfort or insight. For XtvN, it’s all about amusement,” Lee said.

XtvN targets the young generation who are used to using multiple digital tools and therefore not limited to a specific platform.

“When tvN was first established (in 2006), it was bold and adventurous. But as it grew in size, it is hard to break free from the stability of the broadcast market. To keep up with the brand’s initial purpose, we have launched the new channel,” Lee said.