Founded in Australia in 2007, the International Campaign to Abolish Nuclear Weapons works to inform the public about the catastrophic consequences of nuclear weapons being used. For its work on the Treaty on the Prohibition of Nuclear Weapons adopted on July 7, ICAN was awarded the Nobel Peace Prize on Dec. 10. 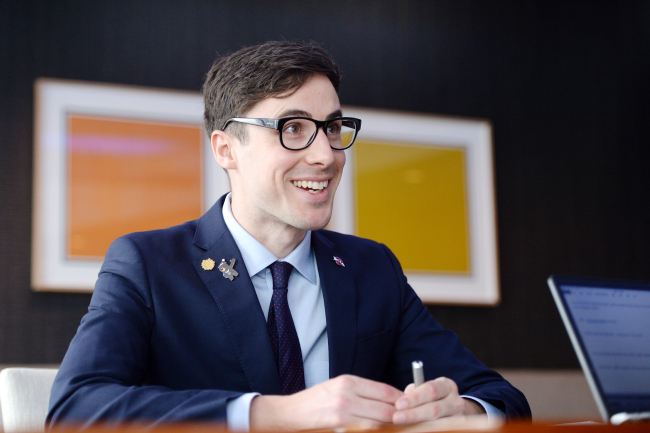 The treaty also prohibits nations from “assisting, encouraging or inducing anyone to engage in any of these activities.” States that have nuclear arms, or those with another country’s nuclear weapons in their territories must dismantle or remove them if they sign the treaty.

Now that the treaty has been adopted, ICAN hopes to bring together countries to sign the treaty to enforce a binding ban on nuclear weapons.

“We very much want South Korea to sign this treaty. And the main impediment at the moment is the concept of the nuclear umbrella, which is inconsistent with the treaty,” Wright said.

Adding that his organization wants North Korea to do the same and that though no nuclear-armed state has so far joined the treaty, Wright says the treaty lays the foundations for eventual global nuclear disarmament.

“The purpose of the treaty is to stigmatize the weapons, and to establish a strong international norm against them. It is a reaction, in a sense, to the failure of nuclear-armed nations to fulfill their disarmament obligations,” he said.

“It’s about putting pressure on them through the power of the norm that the treaty creates. This is a tool that asks every country to state whether they support or oppose nuclear weapons. And we are confident that the vast majority will support it.”

Saying that full nuclear disarmament has not been realized due to lack of political will, he added that the treaty will be a “game changer” in creating the right environment for progress.

Regarding US President Donald Trump’s announcement of nuclear arsenal modernization plans, Wright said that such programs were also backed by the Obama administration, and that most nuclear-armed states are pursuing similar goals.

However, unlike the previous US president, the unpredictable nature of Trump and North Korean leader Kim Jong-un has put the world in grave danger, Wright says.

Seoul, however, faces another difficulty. The South Korea-US alliance effectively places the country under the US nuclear umbrella. Wright, however, suggests that Seoul can maintain the alliance while rejecting the idea of US nuclear deterrence, and that Seoul should play a role in prompting the US to give up its nuclear weapons.

“We want South Korea to speak out, not in hostility to the US, but in the spirit of friendship that’s what a good friend does,” he said, comparing the situation to one friend discouraging another from drunk driving.

“I think that deterrence is an entirely irrational security policy. Imagine every country argued that it needed nukes for deterrence, would that make the world a safer place? It would be a recipe for disaster,” he said.

“We need to start, view nuclear weapons as weapons, not as some magical tools, and that’s why our campaign has been so focused on what these weapons actually do when they are used,” he said. He added that as long as South Korea relies on the nuclear-armed US to maintain peace on the peninsula, it is effectively relying on the “preparedness of the US to unleash catastrophic consequences” on behalf of the country.