But only three weeks into her job, her dream was quashed as the chairman of her organization started to sexually harass her.

“He wrapped his arm around my waist from behind while I was making photocopies. When we were on a business trip, he asked me whether I had considered spending a night with him. He even touched my buttocks in a hotel lobby,” Seo Kim told The Korea Herald.

When she reported the case to management, they took no action. One of her colleagues told her that it could be because she was “pretty.” There were other women in the organization who had similar incidents with the chairman before, but they didn’t take issue with it, believing nothing would change. 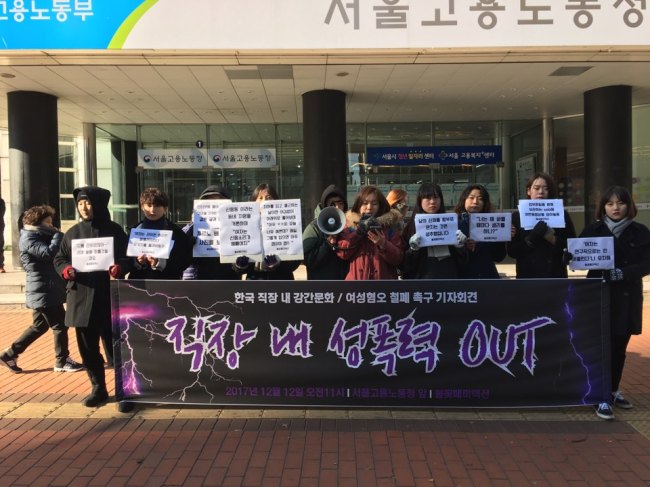 A group of women's rights activists from Bulgot Femi Action called for measures to stop sexual harassment in the workplace in front of the Labor Ministry's Seoul Office in central Seoul, Tuesday. (Ock Hyun-ju/The Korea Herald)

Seo Kim quit the job. In February, she filed a complaint with police. In October, the chairman was ordered to pay a fine of 5 million won ($4,600) and participate in a 40-hour sexual offender treatment program.

“I felt betrayed and disappointed (by the organization taking no action),” she said. “All I wanted was an apology.”

Although the global #MeToo campaign didn’t really take hold in South Korea, a string of workplace sexual harassment cases have come to the fore in the past month, highlighting their prevalence here.

In one of the most highly publicized cases, a 25-year-old female employee at furniture manufacturer Hanssem on Nov. 3 came forward and said her supervisors sexually assaulted her .

The next day, a contract worker at Hyundai Card wrote online that her director had raped her in May after a company dinner. On Nov. 10, a group of nurses from Hallym University Sacred Heart Hospital said they were forced to dance in skimpy outfits at work-related events in October.

Still, experts say many victims choose to stay quiet for fear of losing their jobs or being disadvantaged in the workplace where strong hierarchies and a male-dominated way of thinking prevail.

“Women are viewed more as women, less as coworkers in the patriarchal Korean society where objectifying and sexualizing women became something like a symbol of masculinity,” said Jung Jae-hoon, a social welfare professor at Seoul Women’s University.

“And victims have nowhere to turn. From seeking counselling to filing a complaint with police, they don‘t know where they can ask for help and they choose to stay silent. That does not help in prevention of sexual harassment,” he said.

Men too are victims of sexual harassment.

According to a 2016 survey of 698 women and 453 men by the Korean Institute of Criminology, 45 percent of respondents said they had experienced sexual harassment. Of them, 35 percent were men and 52 percent were women. Nearly 81 percent of offenders in the cases were men.

Some 79 percent said that sexual harassment continues to occur because of low punishment for offenders, followed by the male-dominated office culture (75.5 percent), men’s low awareness of gender equality (69.8 percent) and women’s low status in the workplace (62.2 percent).

But it is not just a gender issue. It is rather about institutionalized hierarchies and abuse of power in the workplace here, said labor attorney Park Yun-jin.

A 2016 poll on 103 victims of sexual harassment by Korean Women Workers Association showed that 84 percent of the sex offenses involved victims’ seniors and CEOs. And 57 percent of the victims said they had received disadvantageous treatment, such as dismissal and bullying, after they reported their cases.

“It seems that women are more likely to be victimized by male offenders, but that’s mainly because many of the powerful in the workplace are men,” said Park, who is also a counselor at Women Labor Law Support Center.

According to 2016 data from Alio Public Information In-One, 27.1 percent of managerial posts were taken by women at 345 state-run organizations. At the top 200 private firms listed on the main bourse Kospi, only 2.34 percent of board members were women, Corporate Governance Service data showed.

“The problem is also mixed with generational conflicts -- conflicts between the young who are relatively more sensitive about gender inequality and the older generation who are not familiar with the concept,” she said.

The awareness of what constitutes sexual harassment seems to be growing, she said. Her organization received some 1,600 reports as of October, with about 70 percent of them about sexual harassment. It received about 1,300 reports in 2016, more than double the figure of 2015.

But the KIC survey showed that sexual harassment is still underreported, as victims fear they might lose a job, be disadvantaged in the workplace or be labeled as someone “too sensitive.”

In the poll, which allowed multiple answers, 54 percent of those who experienced sexual harassment said they had taken no action concerning it. For reasons, some 46 percent of them said they were worried that the action would damage their relationship with offenders, followed by those who thought that no difference would be made (36.3 percent) and those who thought that the action will adversely affect their lives in the workplace (30.6 percent).

“I was told to sit next to a man in a senior position at company dinners because I was a woman and expected to entertain him,” said a 29-year-old office worker who wanted to be identified only by her surname Park.

“I felt offended and helpless, but I didn’t raise the issue because I knew they didn’t mean any harm and I didn’t want to ruin the atmosphere,” she said. “I think a widespread insensitivity to gender issues in Korean society is a problem.”

“Punishing individual offenders could be necessary. But what is more important is that it should lead to a reform in the whole company culture through an appropriate level of punishment and education,” she said.

Also, the government’s role is important, she said, to make sure companies are responsible for creating a company culture where victims can feel safe about coming forward.

“We tell victims to be courageous and talk about what they experienced, but it is hard to speak up in this environment. It not really a matter of individuals’ will. It is a structural problem that should be tackled by companies and government,” she said.

“The government should step up monitoring of companies and make sure they protect victims and punish offenders,” she said.

Under the current system, when sexual harassment cases are not dealt with in the workplace, victims are advised to refer the cases to the Labor Ministry. Last year, 556 people made reports to the ministry, with 29 cases leading to criminal punishment. Only one suspect was indicted.

In light of the Hanssem case, the National Assembly passed a revision on gender equality on Nov. 9 to enhance protection for victims. According to the revision, employers that disadvantage victims for reporting a case can be fined up to 30 million won or sentenced up to three years in prison. Employers who fail to investigate sexual harassment cases involving their employees and punish offenders could face a fine of up to 5 million won.