Savings banks' outstanding household loans stood at 20.6 trillion won as of end-September, up 19.8 percent from a year earlier, according to the data from the Bank of Korea.

Amid softer property regulations and easier access to credit, such loans had been growing at a fast clip since 2013, with the amount nearly doubling over the past three years to 17.2 trillion won as of end-2016. 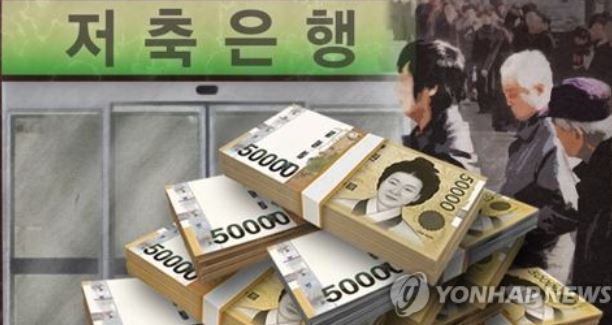 (Yonhap)
Analysts attributed the jump to a set of government measures to cool an overheating housing market and thus curb snowballing household debt, which prompted those with poor credit to turn from commercial lenders to savings banks.

In early August, Seoul rolled out the measures, including the designation of speculative areas under close state scrutiny, tougher mortgage rules and heavier capital gains taxes, in a bid to rein in snowballing household debt valued at some 1,400 trillion won.

South Koreans with poor credit are forced to turn to high-rate loans from savings banks and microfinancing companies as they have little access to loans offered by commercial banks.

South Korea has been doubling down on curbing sharply rising household debt, which analysts see as a time bomb for Asia's fourth-largest economy. (Yonhap)