South Korean game makers have contributed greatly to the recent boom of the country's secondary stock market as their stock prices are on an upswing on hopes of rising earnings, industry sources said Wednesday.

Driven mainly by strong earnings momentum, the tech-laden KOSDAQ market has been recently on a roll with its benchmark price index flirting with the 800-point level. It closed 0.52 percent up at a new all-time high of 789.38 on Tuesday.

According to the Korea Exchange, Pearl Abyss finished at 166,700 won Tuesday, up 12.8 percent from the start of this month. 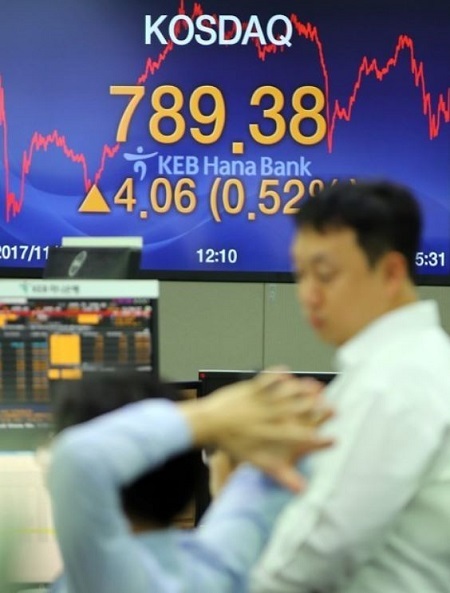 Market watchers attributed their strong performances to a series of new game title launches in the second half and next year. Also responsible were expectations of increased exports to China stemming from a recent thaw in Sino-Korean relations, they added.

Pearly Abyss and Gamevil are expected to launch new game titles in China down the road.

"It was difficult for South Korean game companies to make forays into China due to soured bilateral relations resulting from the row over a US missile defense shield," said Ahn Jae-min, an analyst at NH Investment & Securities Co. "But there are growing hopes that China may allow them to launch new products amid thawing bilateral ties."

Early this month, Seoul and Beijing agreed to put bilateral ties back on track, setting aside their bitter missile defense showdown, and raising hopes for the return of Chinese visitors and lifting of other sanctions.

"The government has vowed to step up efforts to develop the fourth industry and game sector in order to help power economic growth in the future," said Lee Seung-hoon, an analyst at BNK Securities Co. "It is expected to help bolster the industry's growth potential further." (Yonhap)