At Park Hyun-soo’s home in Gangseo-gu, western Seoul, weekday mornings are just like in any other household with young students.

She wakes up her daughter, fixes her something to eat, and rushes around the house to get everything she needs for the day in her school bag. 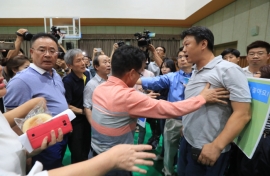 Protesters argue at a forum held on Sept. 5 to gather opinions on the planned establishment of a special school in Gangseo-gu, western Seoul. Advocates of the plan clashed with local residents who have demanded its cancellation, saying a state-run medical center should be built at the project site instead. (Yonhap)

When her daughter is finally off to school, most moms would be glad that the day’s morning task is over. But for Park, it’s when the real agony kicks in.

“I am haunted by the thought that my daughter may be bullied by classmates or be left like a loner with no friends,” Park told The Korea Herald.

“My daughter needs constant attention throughout classes. It is difficult for her to stay focused, especially in a regular education classroom,” she said.

She sends her child to a regular elementary school near home, because in her district of over 600,000 residents, there is no special education institution for students with disabilities.

“It takes hours to get to the nearest special school in another part of the city, and it’s already full,” Park said.

According to the Ministry of Education, as of this month, there are 174 special schools -- public and private -- in South Korea. They accommodate less than 30 percent of the nation’s 89,353 school-age children with mental and physical disabilities.

Of those lucky ones attending a special school, over 2,300 commute more than an hour to get there, the ministry’s data shows.

The rest go to regular schools which are often hostile to disabled students.

Lee Eun-ja, vice president of Korean Parents’ Network for the People with Disabilities, said special schools can better prepare disabled children to live a better and independent life after education.

“Individualized vocational training is essential for students with disabilities because it can help them build an appropriate career path,” Lee said.

Few would argue with the suggestion that South Korea should build more special education institutions. But a recent effort to build one in Gangseo shows just how difficult it is in reality.

At a public forum held earlier this month on the school construction plan, some attendants -- mostly house owners in the neighborhood -- vehemently opposed the plan. Some said they didn’t want another “unpleasant facility” in the area where property prices are already comparatively cheap. Desperate parents of disabled students knelt down on the ground, begging for understanding.

Disability advocates said they were not surprised by what happened at the forum. In many places across the country, local residents have campaigned against special schools being built in their areas and heaped pressure on their elected representatives to drop such plans. In many cases, they were successful.

According to the Seoul Metropolitan Office of Education, at least two projects to build a special school in other parts of the city are in limbo due to strong resistance from residents.

Still, the latest incident in Gangseo-gu resonated with many ordinary South Koreans, offering them a chance to reflect on their ignorant, and at times, selfish attitudes toward the disabled.

On Tuesday, Education Minister Kim Sang-kon announced a plan to build 18 new special schools across the country over the next five years.

“There still seems to be a lot of prejudices and misunderstandings regarding not only disabled people in our society but other social minority groups such as multicultural families and North Korea defectors,” Kim said at a public special school in Seoul.

Rep. Yu Seong-yep of the second-largest opposition People’s Party who chairs the parliamentary education committee said providing the right education services for all students is “a matter of ensuring a basic human right.”

“We need a law that guarantees special education and related services to tens of thousands of eligible toddlers, children and youth with disabilities,” Yu added.

Lee Eun-ja, vice president of Korean Parents’ Network for the People with Disabilities, said special schools are a core part of social safety net for the disabled.

Through specialized and catered education, people with disabilities can prepare themselves to live a better and independent life.

“Individualized vocational training is essential for students with disabilities because it can help them build an appropriate career path,” Lee said.