This year marks the golden jubilee of ASEAN, a group of 10 nations that have moved beyond their ideological, political, cultural, ethnic and linguistic differences to become a leading regional multilateral organization on the world stage. ASEAN being the Republic of Korea’s increasingly important economic, cultural and security partner, the two sides have designated this year as the ASEAN-ROK Cultural Exchange Year, with a steady stream of events happening in both regions.

The ASEAN Culture House was instituted in Busan on Friday, laying the ground for stronger exchange and understanding of the economically dynamic association, comprised of Brunei, Cambodia, Indonesia, Laos, Indonesia, Myanmar, Philippines, Singapore, Thailand and Vietnam.

Celebrating the significant historical juncture, the ASEAN-Korea Center, in collaboration with the Korean Ministry of Foreign Affairs, Korea Institute of Southeast Asian Studies and media, organized an international conference on the theme of “Partnering for Tomorrow” at the Lotte Hotel in Seoul on Wednesday. 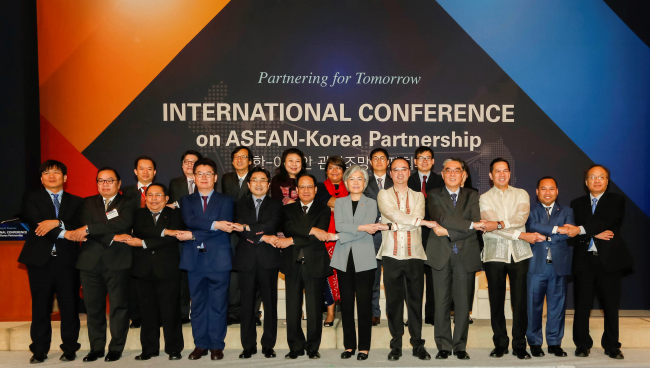 Leading diplomats and scholars representing the Association of Southeast Asian Nations and Korea pose at an international conference marking the 50th anniversary of ASEAN at Lotte Hotel in Seoul on Wednesday. (ASEAN-Korea Center)
The event brought together some 350 diplomats, scholars, journalists and students from ASEAN and Korea, who took stock of their relations and explored avenues of future collaboration, encompassing political security, trade, investment, culture, education and people-to-people issues.

“The birth of ASEAN 50 years ago manifested the aspiration of Southeast Asians for regional peace and prosperity, which has been the determining factor of success in its process of constant evolution and development,” said ASEAN Secretary-General Le Luong Minh in a speech. “From a fledging association in a region embroiled in Cold War tensions and conflicts, ASEAN has persevered and prospered over the last five decades to become an indispensable player and major contributor to peace, security and prosperity in Southeast Asia and beyond.”

Following the launch of the ASEAN Community at the end of 2015, Southeast Asia is moving toward a “rules-based, people-centered and outward-looking” community of nations able to effectively respond to various challenges, he added.

Pointing to the ASEAN-Korea Free Trade Agreement and the target of increasing bilateral trade to $200 billion by 2020, the former deputy foreign minister of Vietnam said both sides are committed to a regional regime of free and fair trade through the early conclusion of negotiations for the Regional Comprehensive Economic Partnership, a proposed FTA between ASEAN and the six states with which it has existing free trade agreements: Australia, China, India, Japan, South Korea and New Zealand. 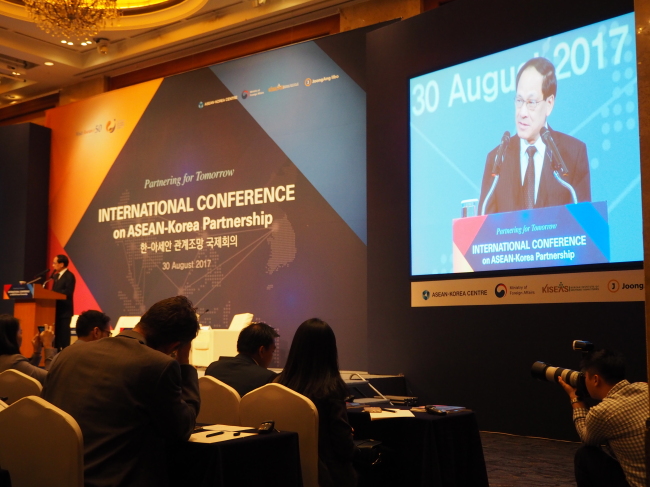 Korean Foreign Minister Kang Kyung-wha, who made her debut as the country’s diplomat in chief at the ASEAN Foreign Ministers’ Meeting in Manila on Aug. 5, lauded the organization for making strides in the political and security arena, thereby deterring a large-scale regional conflict over the past 50 years.

“ASEAN has nurtured a habit of dialogue and cooperation to maximize its common interests,” she said. “Furthermore, it has successfully led several multilateral cooperation mechanisms for regional peace and prosperity, including the ASEAN Plus Three, East Asia Summit and ASEAN Regional Forum.”

The ASEAN Community, covering a population of 640 million and a combined wealth of $2.5 trillion, has captured the attention of the international community, Kang added. 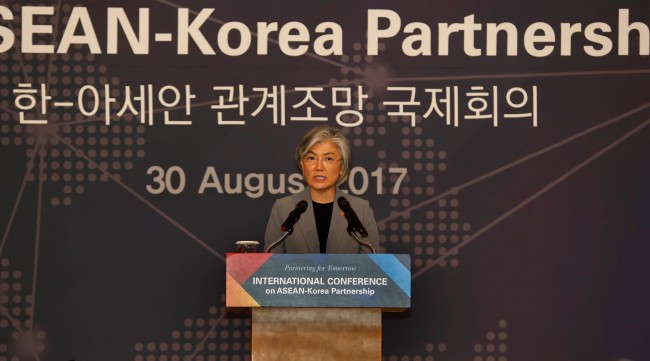 South Korean Foreign Minister Kang Kyung-wha (ASEAN-Korea Center)
ASEAN and Korea established their sectoral dialogue partnership in 1989, and elevated their relations to a strategic partnership in 2010. ASEAN is Korea’s second-largest trade partner as well as investment destination, with some $41 billion of Korean foreign direct investment plowed into its disparate economies in 2015. More than 3,770 Korean subsidiary companies operate there in a wide range of industries, particularly in manufacturing and increasingly in services in recent years, according to the ASEAN Investment Report 2016.

Korea’s small and medium-sized enterprises are also expanding their footprints across ASEAN, where the vast majority of businesses are micro, small and medium-sized. Korean firms are progressively leveraging ASEAN as a base from which to penetrate the blooming regional market as well as to enter regional and global value chains.

“We hope to further liberalize the ASEAN-ROK FTA and strengthen cooperation in emerging fields, such as micro, small and medium-sized enterprise and smart city development in the era of the ‘fourth industrial revolution,’” the Korean diplomat highlighted. 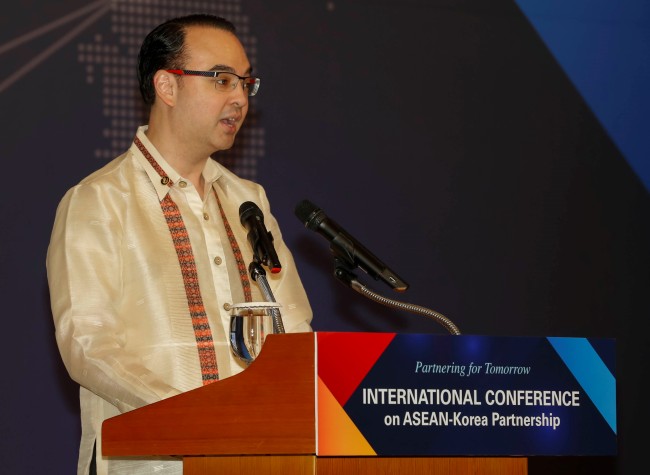 “If we want to overcome our future challenges, we must start to think of ourselves less as Filipinos, Koreans, Japanese or Chinese but more as Asians,” argued Philippine Secretary of Foreign Affairs Alan Peter S. Cayetano. “While understanding that we have to promote and fight for our national interests, let’s not forget that we have larger regional interests.”

ASEAN will make concerted efforts to accelerate community building and integration in line with the ASEAN Community Vision 2025, which aims for a “politically cohesive, economically integrated, and socially responsible” community, he said.

“Economically, we will work to close our development gaps and spread the fruits of growth so that no one is left behind,” according to Cayetano.