[ The Korea Herald – Send E-mail ]
‘Turkey, lasting bulwark against global terrorism, extremism’
By Joel Lee
Published : Sep 4, 2017 - 17:46
Updated : Sep 5, 2017 - 17:21
Amid celebrations of 60 years of official diplomacy with Korea, the Turkish Embassy on Wednesday observed its national holiday -- Victory Day -- and paid tribute to the triumph against occupying Greek forces in the Battle of Dumlupinar on Aug. 30, 1922, which helped create a modern, republican nation state.

During a reception in Seoul, Turkish Ambassador to Korea Arslan Hakan Okcal also noted the thriving strategic partnership since 2012 between Ankara and Seoul, as the two nations have bolstered their cooperation politically, economically, culturally as well as militarily to counter rising threats of terrorism and nuclear proliferation.

“The victory in 1922 not only ended the foreign occupation of our country under Western imperial powers after the First World War, but also led to the foundation of a modern republic based on international values of democracy and secularism as championed by Ataturk, the father of all Turks,” the envoy said in a speech.

The guiding principle of Turkey’s foreign policy -- “peace at home, peace in the world” -- as enshrined in the constitution, originated from Mustafa Kemal Ataturk (1881-1938), an army officer, revolutionary, and founder and first president of Turkey from 1923 through 1938, according to Okcal. 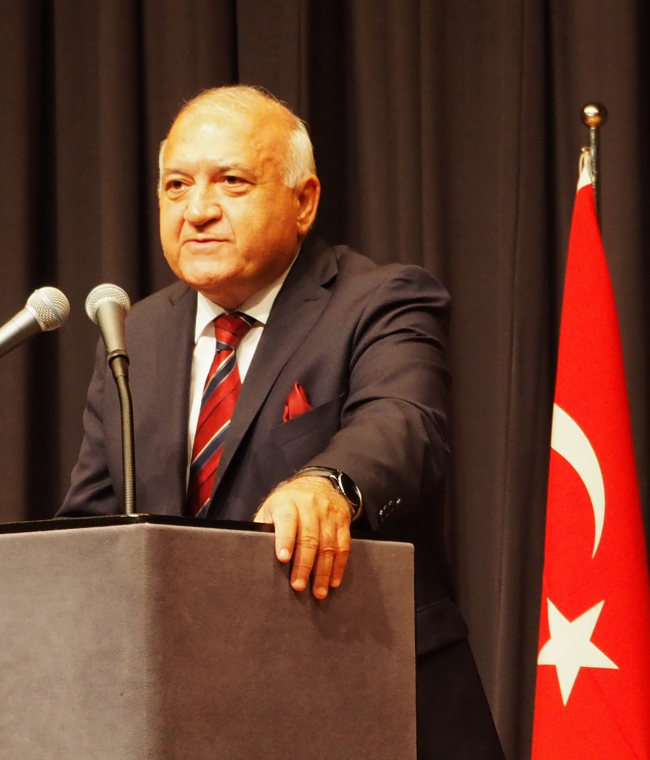 Turkish Ambassador to Korea Arslan Hakan Okcal (Joel Lee/The Korea Herald)
The ambassador highlighted that the Turkish army has faithfully performed its duties endowed upon it by the constitution, protecting the country’s democracy, secularism, rule of law and justice. It has also defended and upheld democracies of the West as a member of the North Atlantic Treaty Organization, he added.

“The immediate vicinity of Turkey’s southeastern borders are marred by war and vicious crimes committed against humanity. Terrorism, extremism, ethnic and religious hatred and sectarianism are ravaging this region with dangerous spillover effects on Turkey,” he stressed, adding the Turkish army is fighting against all terror groups and living up to its international responsibilities as a coalition and NATO member.

Pointing to last year’s failed putsch by coup plotters -- inspired by the Fethullah Gulen Terror Organization -- Okcal said 250 Turkish citizens lost their lives and key edifices like the Turkish Grand National Assembly and the Presidential Palace in Ankara were destroyed, but the revolt was forestalled by brave citizens who took to the streets against the mutineers.

Okcal honored his fallen forebears of the 1950-53 Korean War, to which Turkey sent 21,000 troops to defend South Korea’s freedom and democracy from North Korea’s invasion. Nearly 1,000 Turkish soldiers lost their lives and some 1,400 sustained injuries from the war. 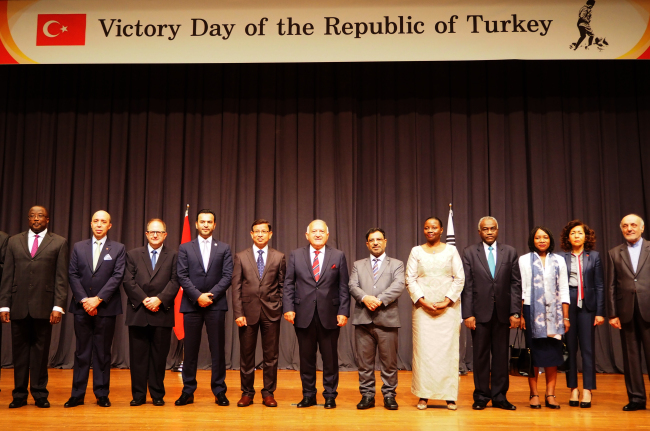 Ambassadors at the Turkish Victory Day reception in Seoul on Aug. 30 (Joel Lee/The Korea Herald)
“Many of our fallen heroes are eternally resting in peace on Korean soil with their Korean brothers. That is why our nations call each other ‘blood brothers’ -- a testament to our special friendship,” the diplomat underlined.

The envoy admonished North Korea for escalating tensions in the peninsula with its nuclear and missile provocations. He urged the communist country to return to dialogue for lasting peace and security. 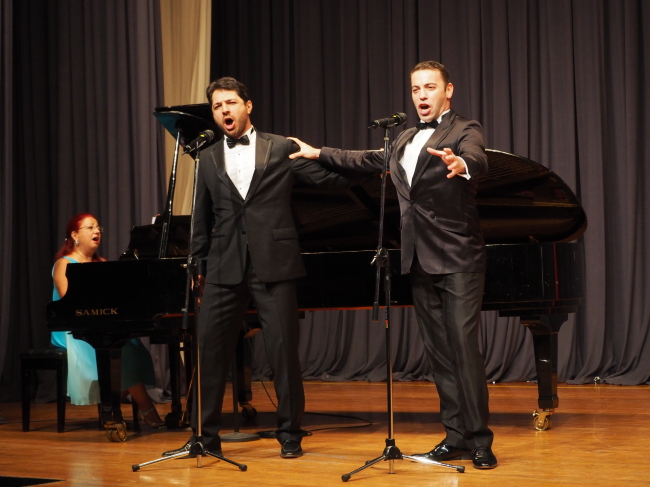