[ The Korea Herald – Send E-mail ]
Turkish celebrations to mark blooming ties with Korea
By Joel Lee
Published : Aug 28, 2017 - 17:36
Updated : Aug 28, 2017 - 17:39
Marking the 60th anniversary of diplomatic relations between Turkey and Korea, the Turkish Embassy in collaboration with the Turkish Ministry of Culture and Tourism will organize a series of cultural events this week ranging from music and dance to food and a reception.

This year has also been marked the year of Turkey-Korea cultural relations, whose ties stretch back over 1,500 years.

The first event at the National Theatre of Korea’s Daloreum Theater in Seoul at 7:30 p.m. on Tuesday will feature Turkish operas, oratorios, arias and duets. 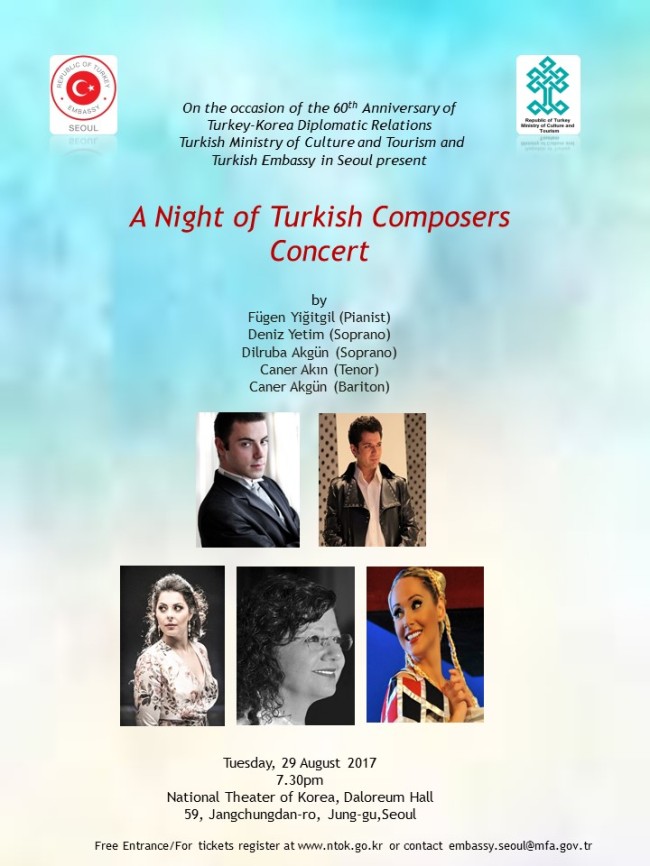 Titled “A Night of Turkish Musicians,” the concert will be led by members of the Istanbul State Opera and Ballet -- sopranos Deniz Yetim and Dilruba Akgun, tenor Caner Akin, baritone Caner Akgun and pianist Fugen Yigitgil. It is free of charge and guests can reserve tickets on the theater’s website or contact the embassy at embassy.seoul@mfa.gov.tr.

On Wednesday at 12:30 p.m. at the Grand Hyatt Seoul, a reception marking Victory Day will be held. All Turkish citizens are welcome.

From Wednesday through Sept. 10 at the Grand Hyatt Seoul, the Turkish Food Festival will be held, introducing some 35 traditional dishes in a buffet prepared by a Turkish chef.

On Friday at Ankara Park in Yeouido, Seoul, a series of celebrations will be held to mark the Day of Turkey, starting at 11 a.m. The park was created through a sister partnership between Ankara and Seoul, and is home to the Ankara House, built in a Turkish architectural style. People can listen to traditional music and dance and try the Turkish art of marbling, or “ebru.” Turkish china, or “cini,” will be exhibited, and kebabs, ice cream, coffee and the dessert lokum will be served.