[ The Korea Herald – Send E-mail ]
Students eye Indonesia as new career horizon
By Joel Lee
Published : Aug 28, 2017 - 17:38
Updated : Aug 28, 2017 - 17:39
Piqued by growing educational and employment opportunities in Southeast Asia, a select group of Korean students will study across Indonesian universities for a year starting from the fall semester through the Darmasiswa scholarship program.

The one-year scholarship is organized by Indonesia’s Ministry of National Education in partnership with the Department of Foreign Affairs, and offered to foreign students from countries with diplomatic ties to Indonesia. Students learn about the Southeast Asian country’s diverse cultures and language, encompassing art, music, dance, cuisine, philosophy and more.

Twenty-eight Korean students were selected from a pool of about 100 applicants for the 2017-18 program. They will study at leading universities in and around Jakarta, Surabaya, Bandung, Malang, Medan and Aceh, among others, and are set to depart Tuesday.

Darmasiswa covers all the costs of education, housing and food. It started in 1974 as an initiative of the Association of Southeast Asian Nations, and was only available to ASEAN students then. But in 1976 it started admitting pupils from other countries, mainly Australia, Canada, France, Germany, Hungary, Japan, Mexico, the Netherlands, Norway, Poland, Sweden and the United States. 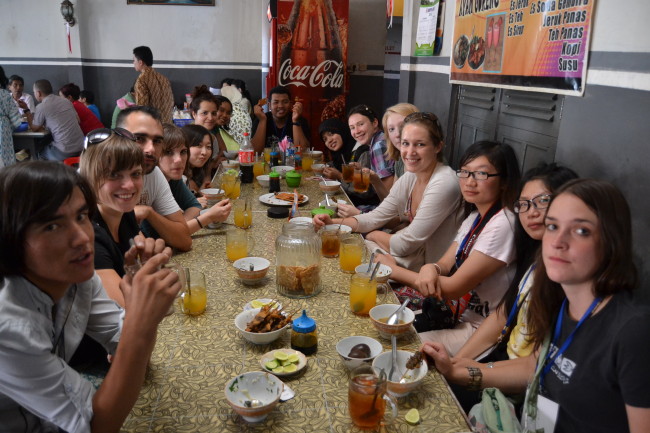 International students participating in the Darmasiswa scholarship program organized by the Indonesian government (Word Press)
Since the early 1990s, Darmasiswa has been open to students from all nations with which Indonesia maintains diplomatic relations, mainly covering 75 countries. Over the last five years, 196 Korean students have participated and completed their studies.

The main purpose of Darmasiswa is to enhance understanding of Indonesian culture and language, and lay the ground for future cooperation, according to the Indonesian Embassy in Seoul, which organized a briefing for the Korean students on Aug. 8.

“There are 50,000 Koreans in Indonesia and 40,000 Indonesians in Korea. I hope this program can be a strong bridge for our students and lead to more cooperation based on better understanding of each other,” the embassy’s Minister Counsellor Aji Suriya told The Korea Herald.

“Indonesia is the world’s largest archipelago nation with 17,000 islands. We have 300 ethnicities, cultures and languages, but all call ourselves Indonesian and believe in one nation. We are one within diversity. I hope that the students will be able to recognize Indonesia’s rich cultural diversity within unity.”

Noting that ASEAN is becoming a stable regional force on the world stage, Suriya pointed out that Korea is paying greater attention to the bloc of 10 nations, saying, “Now is the time for Indonesia and Korea to go hand-in-hand.”

The diplomatic mission said Korean students’ interest in Indonesia is growing, particularly covering the language, thanks to its stable and rapid economic development and employment opportunities. The Indonesian economy, where numerous Korean companies operate, is expected to grow at around 5.2 percent this year and 5.1 percent annually through 2020, according to Trading Economics.