The Bank of Korea will issue 2.3 million notes of the bill on Nov. 17, according to officials. While big events have often been celebrated with commemorative coins, this is the first time that paper money will be issued. Officials said the PyeongChang Olympics organizing committee had requested paper bills. 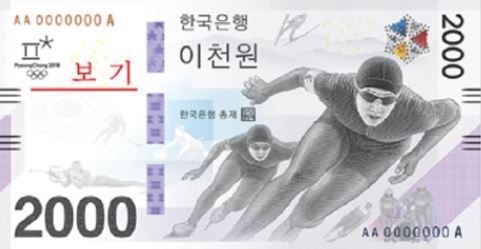 This photo provided by the Bank of Korea shows a 2,000 won bill that will be issued to commemorate South Korea`s hosting of its first Winter Olympics. (Yonhap)
PyeongChang, a mountainous resort city east of Seoul, will host the 2018 Winter Games on Feb. 9-25.

The front side of the bill will carry images of eight different Winter Olympics competition categories, such as speedskating, ice hockey, curling and bob sleigh. The back side will have images of a tiger and red pine trees drawn by Joseon Dynasty painter Kim Hong-do. (Yonhap)