A report from the Hyundai Research Institute estimated China's high-end consumer goods imports market to grow to $37 billion by 2020 as the population surpasses 1.4 billion and the per capita gross domestic product hops over $20,000 by then. The market already ranked 10th globally last year with $26.6 billion after an annual average growth of 17.4 percent since 2006.

The institute noted notable shifts in the market, away from high-priced top luxury products like jewelry and wristwatches to more middle-class, easily accessible goods such fashion apparel and accessories. 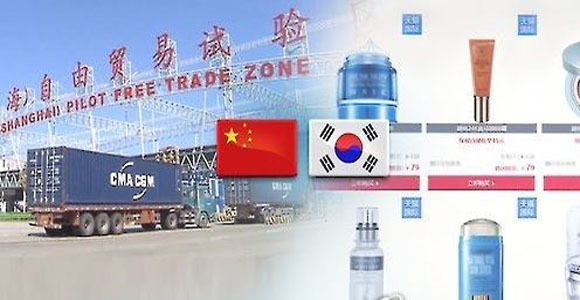 (Yonhap)
Jewelry was the biggest market and watches the fourth-largest in 2011. They have since dropped to fourth and sixth, respectively.

The No. 1 product was replaced by clothing, second by beauty products and third by fashion accessories. The market for beauty products grew 28.3 percent over the past five years, marking the biggest gain.

South Korean companies had 7.8 percent of the Chinese consumer goods market last year, up from 4.2 percent in 2011, as exports of cosmetics jumped seven-fold during the period. By comparison, market dominance by the top three consumer goods exporters to China -- Hong Kong, Switzerland and France -- dropped from 86 percent to 67.7 percent during the same period.

The institute, however, said the figures indicate heavily skewed exports, with beauty products accounting for 73.5 percent of South Korea's consumer goods exports to the Asian neighbor. Other promising goods, such as apparel, accessories, jewelry, cigarettes, alcohol and wristwatches stopped at between fourth and tenth in rankings, the report showed.

"We need to find a new growth opportunity by going after China's high-end consumer goods market," Baek Da-mi, a senior researcher at the institute, said. "For that purpose, we have to change the exports structure that relies heavily on the beauty sector and aggressively make use of the Korean Wave in marketing and promotion." (Yonhap)