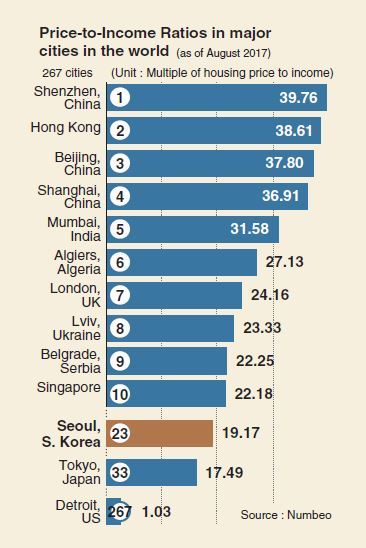 Seoul’s price to income ratio for housing this year was ranked 23rd among 267 major cities in the world, according to Numbeo, a global database of user contributed data on cities and countries. This was visibly lower than the figure in the Great China Region such as Shenzhen, Beijing, Shanghai, and Hong Kong.

The PIR value for South Korea’s capital was 19.17, which means that it would take an average citizen the corresponding number of years save up to purchase a house.

The most expensive cities in terms of housing were Shenzhen, Hong Kong, Beijing, Shanghai, and Mumbai, all recording PIR values of 30 or more. Tokyo was ranked 30th, with 17.7 in PIR value.