Samsung Electronics closed at 2,351,000 won ($2,080), down 1.05 percent compared to Thursday’s close. Samsung C&T, the de facto holding company of the group and one of the focal points of the corruption scandal, shed 1.48 percent. 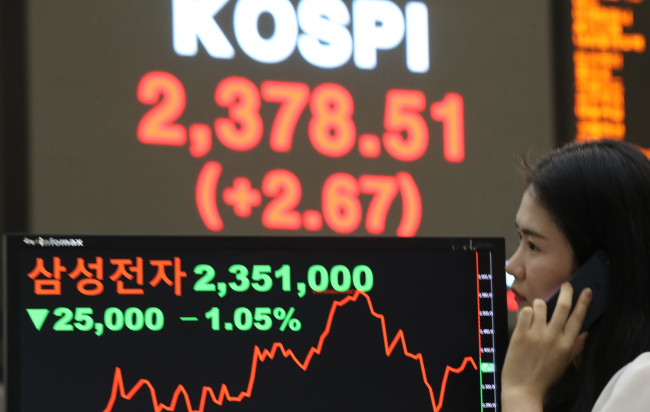 (Yonhap)
Previously, Lee’s arrest, indictment for corruption and prosecutors’ 12-year sentence demand had not put a dent in the stock price of the market bellwether on the top-tier market, according to data from the Korea Exchange.

Also on April 12, when it was reported that Lee lost his board membership in Exor, the holding company of Fiat Chrysler Automobiles, Samsung Electronics gained 0.72 percent.

A drop in the tech giant’s stock price related to Lee, if any, was small compared to drops arising from external risks, such as tensions from North Korea that reemerged in the past few weeks.

Samsung Electronics plunged 4.1 percent on July 28, the largest daily loss this year, on the day of a North Korea missile launch. The price also dropped 2.79 percent a day after US President Donald Trump said North Korea would face “fire and fury” in case of additional nuclear provocations.

As the court decision has little to do with the smartphone maker’s performance, Kim Hyoung-ryoul, an analyst at Kyobo Securities, told The Korea Herald that the sentencing will have a limited impact.

“The verdict might weigh on investors’ sentiment instantly, but would not result in a rapid change in Samsung Electronics’ business atmosphere,” Kim said. 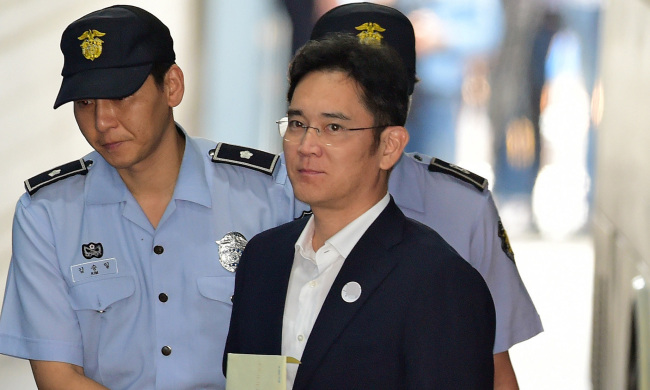 Samsung Electronics Vice Chairman Lee Jae-yong enters the Seoul Central District Court in Seocho-gu, Seoul, to hear his verdict Friday. (Yonhap)
Samsung Electronics has played a critical role in the Kospi’s unbridled run that peaked at 2,451.53 on July 20 throughout this year, on the back of global tech rallies, coupled with abated uncertainties after Moon Jae-in was sworn in as president in May.

The electronics giant, whose market cap tops 300 trillion won, had gained 31.9 percent this year, as of Thursday, while the Kospi had risen this year by 17.2 percent as of Thursday’s close.

The index peaked on July 20. But in the past 20 trading days, Samsung Electronics dropped 4.58 percent, while seeing foreign investors flee to the tune of 1.95 trillion won.