The composite consumer sentiment index for August came to 109.9, down from 111.2 a month earlier, according to the survey by the Bank of Korea.

Tensions have spiked on the Korean Peninsula as North Korea and the United States exchanged bellicose rhetoric after the UN further tightened sanctions on North Korea for its two tests of intercontinental ballistic missiles last month. 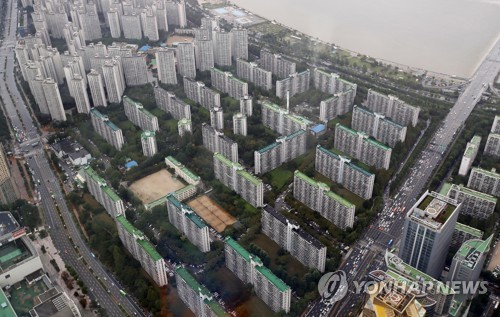 North Korea announced a plan to launch ballistic missiles towards the US Pacific territory of Guam. Also, US President Donald Trump said the US military is "locked and loaded" to deal with North Korea's provocations and North Korea would be met with "fire and fury" if it continued to threaten Washington.

However, tensions subsided as North Korean leader Kim Jong-un held off on the launch against Guam, saying that he would watch Washington's behavior "a little more." Trump has said Kim made a "wise" decision.

The BOK said a separate index gauging the people's sentiments toward the current economic conditions came to 93 in August, down from 96 in July.

In addition, an index measuring the public's feelings toward economic conditions in the next six months fell to 104 in August from 109 in July.

A separate index measuring the public's feelings toward home prices fell to 99 this month from 115 in July, marking the greatest decline since December 2015 when the index dropped by 11 points, according to the data.

The BOK attributed the sharp decline to the government's recent tough measures to cool down the overheated housing market.

The latest monthly index is based on a survey of 2,004 households throughout the country from Aug. 11 to 18. (Yonhap)