Lilian to refund all sanitary pads

Lilian on Wednesday released a statement to refund all of its sanitary pads that are allegedly causing hormonal disruption in women.

Klean Nara, the producer of Lilian sanitary pads, apologized for the concerns it has caused users. While the inspection is still on-going to discern the validity of the complaints of supposed harmful chemical substance that are curtailing female monthly periods, Klean Nara has decided to refund all Lilian products for its accountability.

All Lilian pads, including the ones that are opened and without receipts, will be refunded starting Monday, when more information on the process will become available on the Lilian and Klean Nara websites. 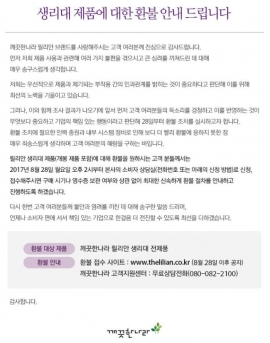 Six out of ten women who have used Lilian pads for a prolonged time have complained of abnormal menstruation cycles, according to Ecofem, a female environmentalists’ association that collected reviews of the product from 3,009 women.

Lilian pads became one of the most searched for words on local portal site Naver, along with ecofriendly fabric alternatives that can be reused after washing. 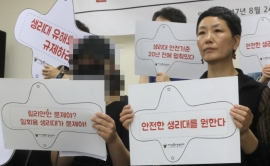 Ecofam held a press conference on Thursday to call for a bolstered inspection on the current regulations used by the Ministry of Food and Drug Safety to approve of disposable sanitary pads.

The MFDS on Thursday carried out an on-site inspection of five companies that are responsible for 90 percent of the sanitary products distributed in Korea to see if the companies used too much chemical adhesive and if the raw materials used in the production process abided by the permitted guideline. The searched companies are Yuhan Kimberly, LG Unicharm, Klean Nara, P&G Korea and Welcron Healthcare.

The MFDS will also meet with gynecologists and obstetricians on Friday to discuss the best ways to tackle the safety issues of sanitary products.