A range of South Korean female sanitary pads is to undergo a government safety inspection as users raised claims Sunday of hormonal disruption after using the product.

Users of Lilian pads have raised claims online that their periods were ending faster than before and with less amount of blood. An anonymous user who claimed to have used the Lilian pads for over a year said her vaginitis had worsened during the time. 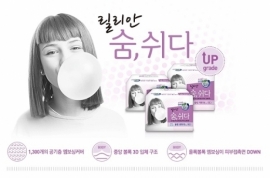 Taking note of the spread of negative feedback, the distributors of Lilian have recently put up on their website a new sign saying that the Lilian products have been approved by the Ministry of Food and Drug Safety, and that every ingredient used in Lilian pads has had its safety confirmed.

The ministry is expected to collect samples of the Lilian pads within August and run an inspection in September to inspect the quality of pads, according to local media reports, Sunday.

Lilian pads are one of the most affordable sanitary products in the local market.