The unemployment rate stood at 3.5 percent last month, staying flat from the same month last year, according to the report compiled by Statistics Korea. From a month earlier, it dropped 0.3 percentage point.

The unemployment rate for young people, aged between 15 and 29, was 9.3 percent, slightly up from 9.2 percent tallied a year earlier but down from June's 10.5 percent. 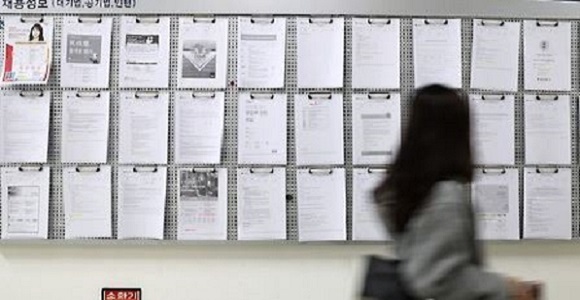 (Yonhap)
The statistics office said an upturn in employment by the manufacturing business, which accounts for one-fifth of the country's total hiring, made up for a loss in the retail and accommodation sectors.

Some 4.5 million workers were employed by manufacturing companies in July, up 50,000 from a year earlier, continuing the positive on-year growth for two months in a row.

The monthly figure had been in negative terrain for 11 straight months since July last year as Asia's fourth-largest economy had been struggling with faltering exports.

But the sector's employment made a turnaround in June for the first time in 11 months as South Korean exports, the key economic driver, posted the eighth consecutive month of growth since November last year on the back of rising global trade.

"The employment of the manufacturing sector partly reflects a base effect from last year," said Bin Hyun-joon, head of the agency's employment statistics division. "But also, major industries, such as carmakers, showed clear signs of recovery thanks to stellar overseas sales."

On the other hand, the number of new jobs offered by hotels and restaurants fell 18,000 on-year to 2.3 million last month, while those by local retailers and wholesalers lost 12,000 to 3.76 million in July.

These sectors were directly hit by a decrease in Chinese tourists, following the Beijing government's travel ban in retaliation for Seoul's deployment of a US missile system.

Seoul and Washington said the Terminal High Altitude Area Defense system is only meant to counter North Korea's evolving nuclear and missile threats. But China has repeatedly pressed South Korea to withdraw the THAAD missiles out of concern that the deployment could hurt Beijing's security interests.

According to separate government data, the number of Chinese visitors tumbled 67.8 percent in July, extending its losing streak to five straight months.

The finance ministry said it will make all-out efforts to ease the tightened job market by implementing the 11 trillion won ($9.7 billion) supplementary budget aimed at creating some 12,000 new jobs. The extra budget bill was approved by the National Assembly in late July after months of political debate over the effectiveness of additional government spending.

"The government will do its best to use the extra budget as fast as possible and push forward with job-oriented economic policies in a way to improve the country's employment condition," the Ministry of Strategy and Finance said in a release. (Yonhap)