[ The Korea Herald – Send E-mail ]
Emboldened Moon to spur NK dialogue, but challenges remain
By Shin Hyon-hee
Published : Jul 2, 2017 - 20:27
Updated : Jul 2, 2017 - 22:21
President Moon Jae-in appears to have won his US counterpart Donald Trump’s fundamental support for his approach toward North Korea and a US missile shield during their first summit, but challenges persist over future dealings with the nuclear issue and trade, analysts said Sunday.

During Moon’s visit last week, the two leaders were seen building personal rapport and reaffirming their commitment to the 60-year alliance.

Seoul managed to keep at bay the controversy over its decision to freeze the deployment of the US’ Terminal High Altitude Area Defense system here, which observers had fretted may overshadow the meeting. 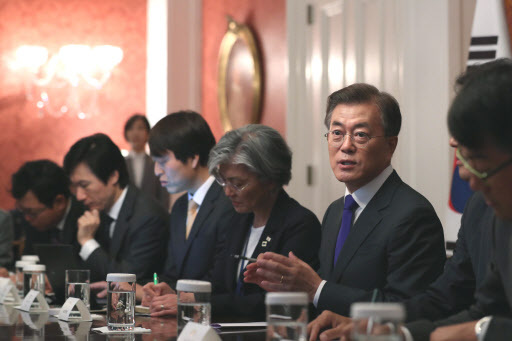 President Moon Jae-in meets with South Korean correspondents in Washington, D.C. on Saturday. (Yonhap)
Another contentious issue had been a gap in their stances toward Pyongyang, with Moon seeking to restart dialogue and Trump pushing for a “maximum pressure” policy and ditching talks without the Kim Jong-un regime’s denuclearization commitment.

At a joint news conference, however, Moon said both sides agreed to work to resolve the nuclear issue based on his “phased and comprehensive approach” designed to start with a moratorium on the North’s nuclear and missile tests, progress to a complete disarmament and ultimately the creation of a peace regime. 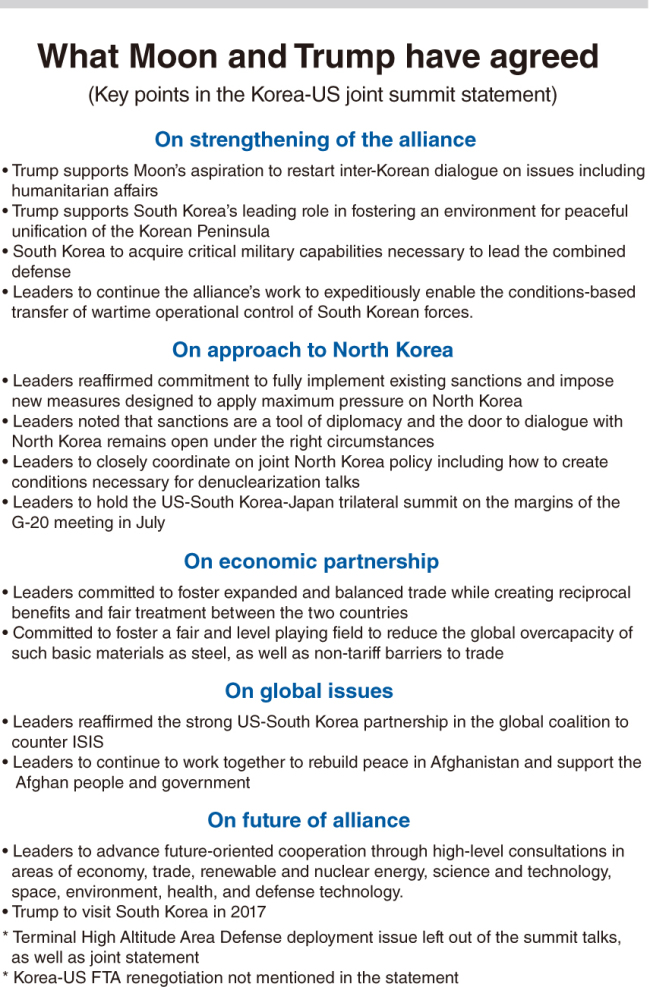 A separate joint statement stipulated their resolve to impose new sanctions to “apply maximum pressure,” but stressed the door to dialogue remains open “under the right circumstances.” It also said Trump supported South Korea’s “leading role” in fostering an environment for a peaceful unification.

Moon said he was able to secure his counterpart’s backing over North Korea by exerting flexibility about the “right circumstances.” On THAAD, he gave assurances that its halt is not intended to upend its deployment. Trump also “understood” Seoul’s need to ensure “procedural legitimacy” by conducting an environmental review of the THAAD battery site.

“We’d decided it would be wise not to specify the conditions at this point. … As President Trump said, we would have to use our senses to determine it given the shifting political situation,” Moon said at a meeting with reporters in Washington on Saturday.

In another development, the presidents vowed to “expeditiously enable” the conditions-based transfer of wartime operational control by boosting South Korea’s defense capabilities including through the Kill Chain and Korean Air and Missile Defense pre-emptive strike systems.

The OPCON handover was initially set for 2015 but was delayed until the 2020s under the Park Geun-hye government. Moon had called for its early execution as part of his campaign pledges.

Cheong Seong-chang, head of unification strategy at the Sejong Institute, projected based on the summit results that the transfer could now be completed no later than 2020.

“The two leaders displayed ‘great chemistry’ and were apparently capable of laying the foundation to explore common ground even on sensitive matters,” he said in a commentary, referring to Trump’s portrayal of the summit.

Lee Si-hyung, Seoul’s former deputy trade minister and ambassador to the Organization for Economic Cooperation and Development who currently heads the Korea Foundation, said the summit bears significance in that the two presidents exhibited a united front on North Korea and the alliance with Seoul playing a “leading role.”

Though Trump bashed a free trade pact and what he called “imbalance” at the conference, they managed to only carry a basic position on trade expressed in a “refined, well-chosen language in a concise manner,” Lee pointed out.

“Unlike security issues, if the two leaders had reached a ‘consensus’ on trade at their very first summit it would be rather difficult to call it success,” he wrote on Facebook.

“Now Seoul’s urgent task is to refurbish the trade-related organizations and personnel so that it can devise countermeasures on the US interests in preparation for future dealings.”

The possibility also remains over a future clash over North Korea, as Moon, emboldened by Trump’s blessing, is likely to spur his pursuit toward talks with the defiant regime.

The liberal president is widely expected to use the Aug. 15 Liberation Day as a major occasion to make an overture to the North, following the June 15 speech marking the 17th anniversary for a watershed inter-Korean peace declaration in 2000 during which he offered talks in return for a halt in nuclear and missile tests.

In the meantime, Seoul could sound out Pyongyang’s intention during the Northeast Asia Cooperation Dialogue, slated for later this month in Singapore. The Track 1.5 meeting will bring together officials and private sector experts from the members of the six-party denuclearization forum -- the US, China, Japan, Russia and the two Koreas. Joseph Yun, special representative for North Korea policy at the US State Department and the chief nuclear negotiator, is expected to attend this year’s session.

With the regime’s unfaltering nuclear ambition, however, the outlook remains bleak for substantive progress.

“At face value, the summit produced better-than-expected results chiefly because the sides succeeded in papering over their differences,” a retired diplomat told The Korea Herald, wishing to remain anonymous due to the sensitivity of the matter.

“It’s OK for now, given no meaningful development being made on dialogue. But if the Moon administration pushes for it too quickly without sufficient in-depth consultations with Washington, there may well be friction because in fact nothing has changed in the US’ position.”

Cheong also emphasized the need for the allies to follow up on the summit in order to formulate a concrete joint denuclearization strategy and bring China aboard their efforts.

“There needs to be a detailed, realistic step-by-step roadmap for denuclearization,” he said.

“They should also come up with an exquisite plan on how to carry out sanctions and dialogue in parallel so as to convince Kim Jong-un of  disarmament, while drawing a solution to the THAAD row which would be acceptable to all of the three countries and help China play a more active role on denuclearization.”