“Opposite views and conflicts are natural in human society, and I believe we can settle conflicts through dialogue,” the 61-year-old philosophy professor said at her first press conference since her inauguration at the school’s campus in Seoul. 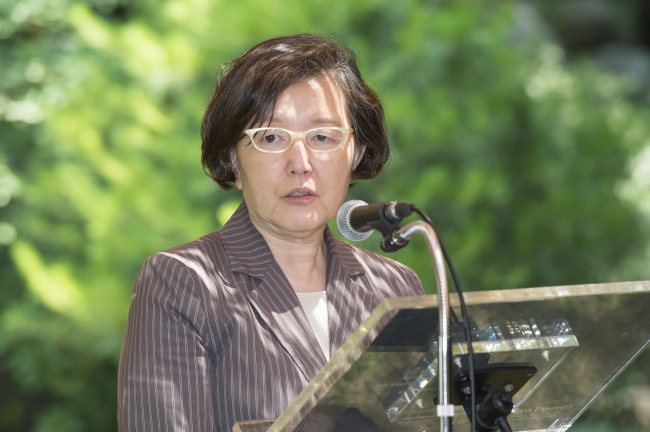 Ewha Womans University president Kim Hei-sook, 61, makes a speech at a press conference held at the school in the morning, 15 June, 2017. (Photo courtesy of Ewha)
Kim took office on May 31, as the university’s first president elected through a direct vote of the faculty, administrative staff and students. The position had been left vacant by Choi Kyung-hee, who stepped down in October last year amid allegations that she gave admission favors to Chung Yoo-ra, the daughter of former President Park Geun-hye’s longtime friend and confidante. The admission fraud was part of a sweeping corruption scandal surrounding Park which eventually led to her impeachment.

The detained Choi is now on trial, along with four other school officials and professors.

The new school chief was at the front of professors’ protests against the school’s leadership then led by Choi.

“The key task is to build trust. The first thing I will do is to resolve conflicts among members of the school and lead them into the path of harmony and integration,” said Kim at the inauguration ceremony last month.

Ewha is one of South Korea’s most prestigious educational institutions with its 130-year history.

During her election campaign, Kim vowed to “return Ewha to its original state and restore its honor.”

Kim’s term as university president is until February 2021.