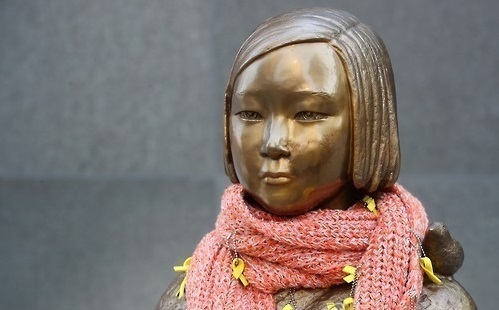 (Yonhap)
The 216-page report, along with a separate data book, is based on an analysis done by 10 professors and experts seeking to shed light on the suffering of Korean women forced into front-line brothels for Japanese troops during World War II, according to the Ministry of Gender Equality and Family.

The report will be officially published Thursday, and distributed to central and local government agencies. It will also be put online for public view, the ministry said.

The report details historical facts, testimonies by victims and witnesses, government stances of South Korea and Japan on the matter and international awareness of wartime brutality.

It, in particular, reaffirmed South Korea's view on the "comfort women" issue and the need for the Japanese government to take legal responsibility for having been involved in forcing the Korean women into sexual slavery.

Citing previously published data showing that many of the victims were mobilized by private agencies, the report still emphasized that the mobilization was made at Tokyo's request and that the state should be held accountable for it.

With regard to a 2015 deal reached between the two counties to resolve the long-running rift over the comfort women issue, the report said that the deal has a limit since it failed to clearly state Japan's legal responsibility.

South Korea and Japan agreed to the deal in December 2015 under which Japan provided 1 billion yen ($9.1 million) to help and support the lives of South Korean victims. But critics have accused the deal of lacking any prior consultation with the victims, as well as Japan's sincere apology and acknowledgment of its legal responsibility.

Historians estimate that up to 200,000 women, mostly from Korea, were forced to work in front-line brothels during World War II. Around 40 surviving South Korean victims are mostly in their late 80s. (Yonhap)