[ The Korea Herald – Send E-mail ]
US seeks regular deployment of strategic military assets in Korea
By a2016032
Published : Apr 28, 2017 - 11:04
Updated : Apr 28, 2017 - 15:50
The United States plans to deploy its "strategic" weapons in South Korea on a regular basis in order to thwart North Korea's threats under an agreement between the allies, according to a joint statement.

The two sides agreed to explore the "full range of available options, including strengthening the regular deployment of US strategic assets, to bolster the alliance's ability to deter and, where necessary, respond to North Korean nuclear, weapons of mass destruction, and ballistic missile use," they said in the press statement. 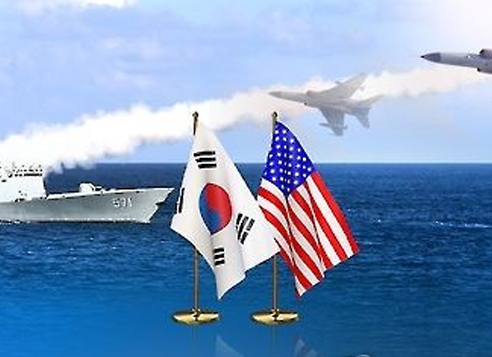 Around 28,500 American troops are stationed in South Korea.

US strategic assets refer to high-profile weapons usually from its bases in Guam, Japan or the mainland, such as B-2, B-1B and B-52 bombers as well as F-35 fighter jets and aircraft carriers.

The allies also highlighted the importance of deploying the Terminal High Altitude Area Defense system on the peninsula as a "purely defensive measure focused solely on North Korea," read the statement.

They took a swipe apparently at China, which strongly opposes the presence of the advanced missile defense system near its soil.

The two sides shared the view that "pressure on or retaliation against the ROK in response to this decision is unreasonable and inappropriate and should be stopped immediately," it added.

They also urged concerned parties to actively address the "root cause" that makes the deployment of THAAD in Korea necessary, apparently referring to the North's continued nuclear and missile programs.

The US Forces Korea has already installed key components of the THAAD system at the deployment site in the southeastern town of Seongju, North Gyeongsang Province. Defense officials said it would soon be operational.

South Korea's delegation to the KIDD was headed by Wee Seung-ho, deputy minister for policy, and his American counterpart was David F. Helvey, assistant secretary of defense for Asian and Pacific security affairs.

Launched in 2011, the biannual session is a comprehensive defense meeting between the allies. (Yonhap)