In a 35 minute telephone conversation with Marine Corps Gen. Joseph F. Dunford, the chairman of the US Joint Chiefs of Staff, his South Korean counterpart Army Gen. Lee Sun-jin stressed that the North's nuclear and missile development can never be tolerated, according to Lee's office. 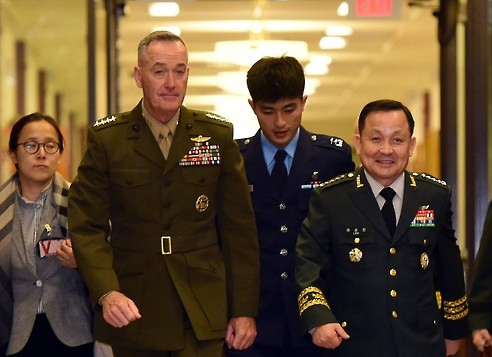 (Yonhap)
He also emphasized the need for deterring the communist neighbor from taking provocative acts through their "ironclad combined defense posture."

Lee cited the deployment of the USS Michigan guided-missile submarine in the waters of South Korea and joint naval drills between the allies.

The two sides' navies staged a joint live-fire drill near the western sea border between the two Koreas earlier this week.

Another major exercise is expected as early as next week involving the USS Carl Vinson aircraft carrier reportedly on its way to Korea.

"It demonstrates how solid the South Korea-US alliance and their joint defense posture are," Lee was quoted as saying.

The US JCS chief agreed that the allies' joint drills would send a strong warning message to the North's leader Kim Jong-un.

Dunford told Lee that the US remains committed to the defense of South Korea and will also continue efforts to press North Korea, according to South Korea's JCS.

It was the third round of phone consultations between Lee and Dunford this year, serving as another occasion to reaffirm their resolve to a stronger alliance, it added. (Yonhap)