US Defense Secretary James Mattis on Thursday reaffirmed plans to deploy its advanced missile defense system in South Korea this year “without a hitch,” singling out North Korea’s nuclear and missile program as a top priority for the new Donald Trump administration. 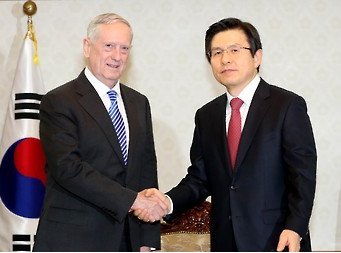 Acting President and Prime Minister Hwang Kyo-ahn (Right) shakes hands with U.S. Defense Secretary James Mattis at the Government Building in Seoul on Feb. 2, 2017. Mattis began his two-day visit to South Korea in his first overseas trip aimed at underscoring the U.S. security commitment to the Asian ally amid growing threats from North Korea. (Yonhap)
Mattis arrived here as part of his first overseas trip designed to cement the bilateral alliance despite some jitters over Washington’s security commitment to its top Asian ally. With Pyongyang’s evolving threats topping the agenda, he is set to discuss the plan to station the Terminal High Altitude Area Defense anti-missile system and other regional and global issues with Seoul officials.

“The Trump administration will deal with the North Korean nuclear threats as a top priority in its security agenda,” the secretary was quoted as saying by Cheong Wa Dae during his meeting with National Security Office chief Kim Kwan-jin.

En route to Seoul, he also told reporters that he would “absolutely” talk about THAAD, which he called a defensive system that only targets North Korea, apparently mindful of China’s unabated opposition.

“Our new administration inherits a very strong, prestigious relationship between our two countries. And it‘s our commitment to make it even stronger especially in the face of the provocation that you face from the North,” he said at a separate meeting with acting President and Prime Minister Hwang Kyo-ahn later on.

“Right now we have to address the reality of the threat that your country and my country face.”

After touching down at the US’ Osan Air Base, Mattis met with US Forces Korea Cmdr. Gen. Vincent Brooks at the Yongsan garrison in Seoul, where he was briefed about the North‘s threats and the overall peninsula situation, officials said.

His two-day visit came as Pyongyang ratchets up its threats to test-fire an intercontinental ballistic missile, for which leader Kim Jong-un said preparations are “in the final stage.” More recently, the North claimed they could launch the missile “at any time and place.”

On Friday, Mattis and Han will hold talks to discuss a joint response to North Korea’s missile and nuclear threats, including the stationing of US strategic assets on the peninsula as part of efforts to reinforce the US’ “extended deterrence.”

They may hammer out a specific timeline for the THAAD deployment, which they agreed to complete around this summer as scheduled during their phone call Tuesday.

THAAD has been a contentious issue here since the allies agreed to install the system September last year. Some opposition parties’ presidential hopefuls urged the government to delay the deployment, citing backlash from China, Seoul’s main economic and trade partner.

A permanent stationing of US strategic assets on the peninsula could also be on the agenda. Gen. Lee Sun-jin, chairman of South Korea’s Joint Chiefs of Staff, raised the need for the measure during his phone call Wednesday with his US counterpart, Marine Corps Gen. Joseph Dunford.

But the defense chiefs are unlikely to talk about renegotiations on the sharing of the cost for stationing American troops here, Seoul officials said. While on the campaign trail, Donald Trump demanded Korea and Japan contribute more to the allies’ defense spending.

“So far, there has been no such request raised from the US,” a Ministry of National Defense official said on customary condition of anonymity. “If the issue were to come up during the meeting, we would explain to them our contribution to the Korea-US alliance.”

Later Friday, Mattis will fly to Japan for a two-day visit. He will hold talks with his Japanese counterpart Tomomi Inada to discuss strategy against North Korea’s military threats and China’s assertive stance in the region.