According to data from the Korea International Trade Association, exports of skincare and makeup products amounted to

The growth occurred amid not-so-favorable market conditions, such as rising diplomatic tension with China over a missile shield and a global economic slowdown. 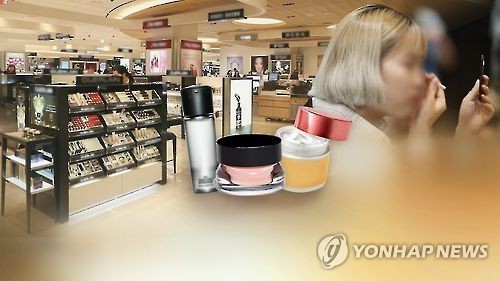 The performance of individual cosmetics companies confirms the industrywide boom.

"In China, premium products are becoming more popular as more women have bigger spending power. Our marketing strategy tailored to the group turned out to be successful," an official from the company told Yonhap News Agency.

The company plans to expand the number of stores in China and make a bigger push in the Southeast Asian market this year.

South Korean securities firms expect AmorePacific, the country's biggest cosmetics company, to release a better performance report than the one the previous year. The report is expected to come out on Feb. 3.

Late last year, the company made inroads into the Middle East market by partnering with Alshaya Group, one of the largest retailers in the region. It aims to open the first store for the color cosmetics brand Etude House in Dubai in the second half of this year.

"The Chinese are getting increasingly interested in maintaining health and beauty as their income rises. The trend pushes the cosmetics market to grow further," an official from the Ministry of Health and Welfare told Yonhap.

While cosmetics exports to China have exponentially grown in the last 4-5 years and some are concerned the growth might soon reach its limit, the official said, "As of 2015, Korean cosmetics took up only 2 percent of the Chinese cosmetics market so there is still room to grow."