“The military exercise takes place in the waters of the three countries,” a Navy official familiar with the matter said on the condition of anonymity. “The exercise is not an interception drill. Using hypothetical targets, we will track, detect and share information (about the missiles).”

The maritime exercise came amid the report that Pyeongyang has built two missiles presumed to be ICBMs. The two missiles are estimated to not exceed 15 meters in length, making them shorter than the North‘s existing ICBMs, the 19-20 meter-long KN-08 and the 17-18 meter-long KN-14. 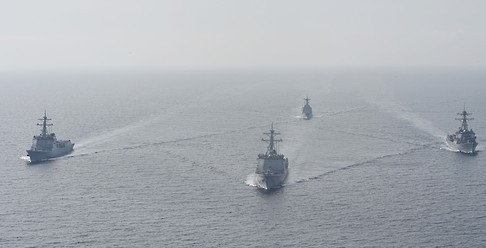 Photo taken on Sept. 26, 2016, the Navy`s warships are in a maritime exercise (Yonhap)
Military and intelligence agencies assessed the missiles would be launched either from a Tongchang-ri launching site near its northwestern border with China -- or from a mobile launcher at the Panghyon airfield in North Pyongan province, where the North test-fired mid-range Musudan missile in October last year.

Pyeongyang has made strides in developing a new prototype of ICMBs that can avoid detection by being launched at a mobile launcher, not a fixed launching station. KN-08 and KN-14 are mounted on Transporter Erector Launcher and thus can be fired at any place. The North has yet to fire the missiles.

“We have yet to confirm immediate indication that the TEL suspected of carrying ICBM has been moved to a launch site,” said a military official, who refused to be identified, during Friday’s briefing. “We are closely watching the North’s ICBM movement.”

Earlier in the day, North Korea’s state-run Rodong Sinmun newspaper renewed its threat to launch ICBMs, saying that they can fire the missile “at any time and place” and that the move is a “self-defense step” to counter the US threat of a nuclear war against the North.

Pentagon‘s press secretary Peter Cook, meanwhile, said that the US is prepared for missile threats from North Korea, reiterating US Defense Secretary Ash Carter‘s pledge to shoot down missiles coming from the North toward Washington and its allies -- if the missiles constitute a threat to them.

“We’ve been prepared for this for some time. You’ve heard the secretary talk about this recently, describing the significant steps that we‘ve taken along with our allies in the region to be prepared for provocative acts by the North Koreans. And we continue to be prepared,“ Cook said at a regular briefing.

It was not the first time that Pyeongyang has ratcheted up military threat in time for the inauguration of new US president. The reclusive regime has often conducted missile and nuclear test several months afterwards.

“It is highly likely that North Korea would conduct the sixth nuclear test or long-range missile,” said Cheong Seong-chang, a senior researcher at the Sejong Institute. “I think they would fire the missile when they mark the birthday of former leader Km Jung-il on Feb. 16th.”