[ The Korea Herald – Send E-mail ]
Ban Ki-moon returns, poised for presidential bid
By Korea Herald
Published : Jan 12, 2017 - 20:10
Updated : Jan 12, 2017 - 22:52
Former UN Secretary-General Ban Ki-moon, upon returning to his home country on Thursday, once again hinted that he would run in the forthcoming presidential election, underlining his past 10 years of experience as the chief official of the international organization.

He also reiterated his denial over the allegations that he received massive kickbacks from a businessman.

“I have vowed to listen to the people’s opinions once I get back home, and I plan to do so, starting from tomorrow,” the former top diplomat said at a press conference, following his arrival at Incheon International Airport.

"Then with a humble heart, I will make a decision that has nothing to do with my private interests. The decision will not take long.” 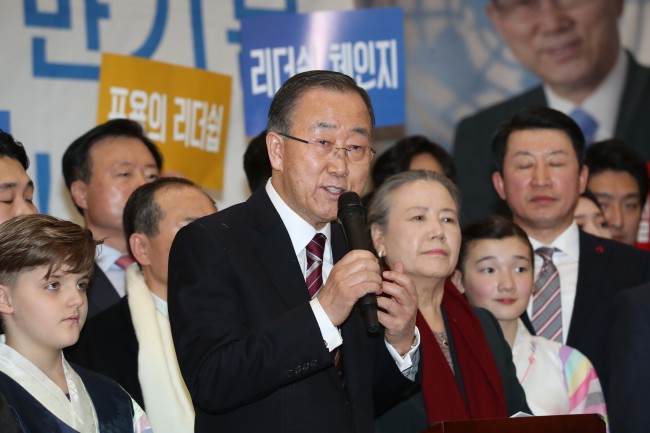 Though he yet refrained from directly announcing his much anticipated presidential candidacy, Ban once again expressed the will to become part of the country’s leadership.

“I have long sought to use my insight and experience as UN secretary-general for the sake of my own country,” Ban said, stressing his prestigious career as the chief official of the world’s most powerful international organization.

When Ban claimed his achievements in promoting world peace, developing impoverished countries, responding to climate change and improving gender equality, loud cheers went up from his supporters’ groups gathered to hear his voice.

“Many have asked me whether I aspire to power,” Ban said, addressing the mounting inquiries on his participation in the presidential race.

“If they mean to ask whether I am seeking to reunite this divided country and to once again make it a first-rate nation, yes, I am ready to give my all.”

He also alluded to his capacity as top diplomat by pointing out the foreign affairs environment of the Korean Peninsula.

“The international situations surrounding our country will deliver a visible impact on our national security, economy and trade,” he said.

“It is urgent to further reinforce the ties with surrounding countries such as the United States, China, Russia and Japan, and to establish relevant countermeasures.”

In an apparent move to distance himself from the current Park Geun-hye administration, which is likely to face a premature termination through Park’s impeachment, Ban expressed regret over the social and political distress his country was in.

“Our nation was torn apart, the economy lost vigor, and society was stained with irregularities,” he said, holding “social leaders” responsible for the current crisis.

“We should put an end to conflicts, vested rights and abuse of power to achieve national unity at all costs.”

His remark was taken as alluding to the extensive corruption scandal centered on Park, an issue which not only triggered record-breaking candlelight protests but also the parliamentary passage of an impeachment bill.

“History will remember the year 2016 and the people who have gathered in the streets under the goal of creating a better country for all. We should never forget the people’s expectations,” he said.

The high-profile figure took a firm stance when denying his alleged involvement in bribery.

“Never during my past 50 years as South Korea’s civil servant and UN official have I done anything against my conscience,” he said.

“It is regretful that some would want to distort or slander my pure intention to contribute to the development of my homeland.”

Ban recently came under fire over a report claiming he had received bribes worth $230,000 from a local businessman. He immediately filed a petition to the Press Arbitration Commission, but details of the allegations are yet to be clarified.

He also stood up against the criticism that as a freshly retired top official of the international organization, he should at least take some time before considering his candidacy in the presidential race.

Such concerns are based on a resolution adopted by the UN in 1946, recommending former secretary-generals refrain from taking government posts after retirement.

“I expect the UN to present its official stance on this issue, but to give you my personal view on the matter, I believe that the given clause does not stop me from (assuming) an elected post,” Ban said in answer to reporters’ questions.

After the press conference, the returned top official took the airport railroad for Seoul Station, as part of his gesture to meet with citizens.

On Friday, he is scheduled to pay a visit to the Seoul National Cemetery, located in his resident area Dongjak-gu in southern Seoul, and then to a nearby community center, according to his spokesperson Lee Do-woon.

Ban's key remarks at the airport

“I learned why successful nations are successful, and why failed nations fail. I witnessed firsthand how the failure of a leader could lead people to ruin.”

“I will work hard to give our youth hope and confidence to become true leaders of tomorrow. I will use my experience and insight that I gained as the UN secretary-general to be a guide for our young people’s future.”

“If by seeking power, they mean that I am seeking to tie our unified country together and make it the best country in the world, I have already said that I am ready to sacrifice myself for that cause.”

“I have never done anything that goes against my conscience.”

“With a humble heart, I will make a decision that has nothing to do with my private interests. The decision will not take long.”