A record number of 10.1 million visitors tread past the gates of Seoul’s four major palaces -– Gyeongbokgung, Changdeokgung, Changgyeonggung and Deoksugung -– as of November, according to CHA, a government agency charged with preserving and promoting Korean cultural heritage.

Nighttime strolls in Gyeongbokgung and Changdeokgung were popular, the statistics showed. A total of 532,565 visitors sought the two palaces’ moonlight walk programs.

CHA plans to further extend the number of days that the palaces are open at night next year. 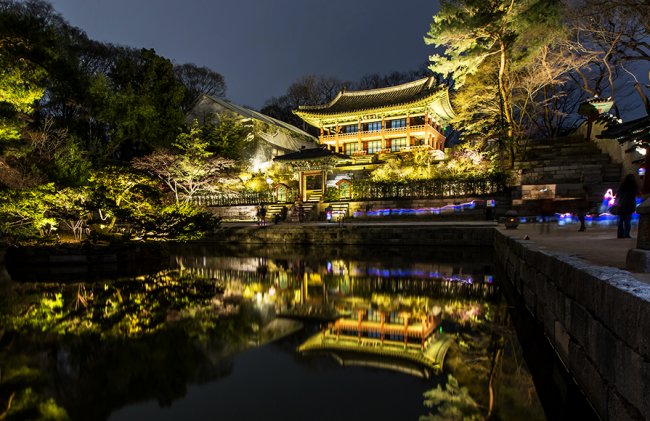 Changdeokgung (CHA)
CHA attributed the soaring numbers to the greater access to the palaces: they were open a total of 120 evenings, up from last year’s 48. Free entry was allowed to those wearing hanbok, the traditional Korean costume, during both the daytime and nighttime.

Meanwhile, CHA revealed Sunday that the government will submit applications for “seowon,” or Confucian academies from the Joseon era (1392-1910), and the Korean Peninsula’s Southwestern Coast Tidal Flats to be considered for the UNESCO World Heritage status.

This is the second time the seowon are being submitted for UNESCO World Heritage listing. The Cultural Heritage Administration withdrew its application in April after an expert panel meeting of the International Council on Monuments and Sites, a UNESCO advisory body, judged the sites be “referred.”

Next year’s UNESCO World Heritage Committee meeting will evaluate the eligibility of Hanyangdoseong, the Seoul City Wall that dates from 1396.