[ The Korea Herald – Send E-mail ]
Navy grounds Lynx choppers after crash
By Yoon Min-sik
Published : Sep 27, 2016 - 16:58
Updated : Sep 28, 2016 - 09:29
The South Korean Navy on Tuesday said they had suspended operations of all 20 Lynx multipurpose military helicopters, a day after one of them crashed into the East Sea.

According to the Navy, the helicopter crashed at around 9:05 p.m. during a joint nighttime drill by Seoul and Washington. Three officers were onboard when the aircraft lost communication and disappeared from radars, about 48 kilometers south of the Northern Limit Line and 52 kilometers east of Yangyang, Gangwon Province.

The pilot had sent out distress signals four times before crashing, according to a Navy official. He added that the military was able to recover parts of the chopper along with the pilot’s helmet at around midnight. 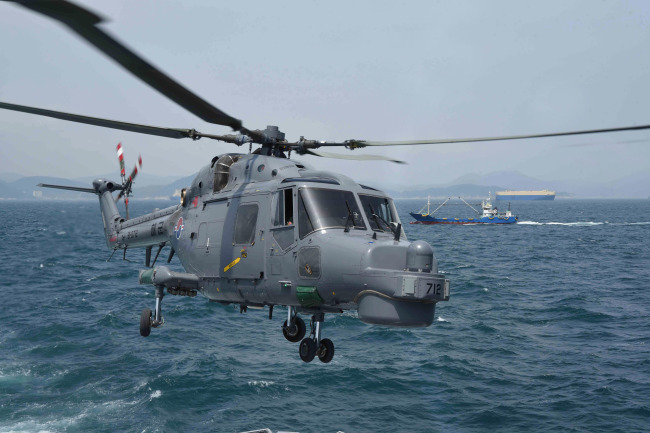 Lynx chopper (Yonhap)
The Navy said it recovered the body of the 33-year-old pilot surnamed Kim around 6:00 p.m. Bodies of the two other crew members -- 33-year-old co-pilot Park and 29-year-old airman Hwang -- were found Wednesday morning.

A Navy investigation committee headed by Vice Adm. Jung Jin-sup is conducting an investigation to determine the exact cause of the crash. Officials said that the weather conditions had met the criteria required for a military drill.

They added that the chopper in question had been acquired by the Navy in 1999 and underwent maintenance in August. The Lynx helicopters are conventionally operated for over 30 years.

It marks the third time the Navy’s Lynx helicopters have crashed. A crash in 1993 left 10 killed, while four died when a Lynx plunged into waters off Jindo, South Jeolla Province.

No distress signals were sent in either of the cases, and the Navy had assessed the pilot’s mistake caused the crashes.

The helicopter was conducting a drill to trace and chase North Korean submarines. North Korea in July conducted what was evaluated as its first successful test firing of a submarine-launched ballistic missile.

Officials said that there is no evidence to believe the chopper was shot down by a North Korean missile, or that Pyongyang’s radars had been operated to spot the aircraft.