Choo, a five-term lawmaker who represents the Gwangjin District of Seoul, was officially named as the new chairwomen to replace Kim Chong-in, the party's interim head who has been maintaining an overall neutral political stance.

"We must break away from factional division, defeatism and outdated politics," Choo said during her acceptance speech. 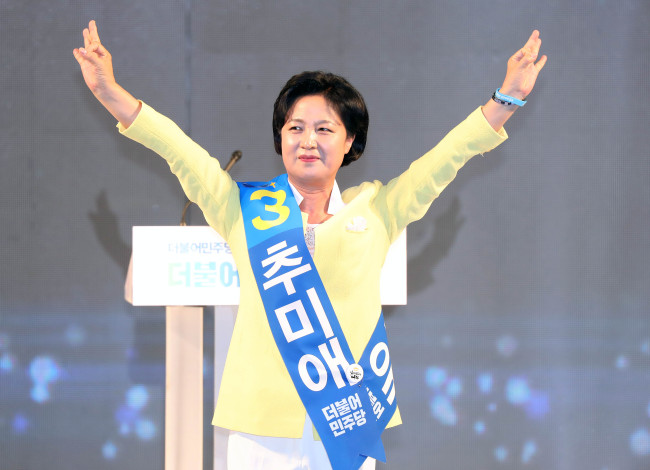 Rep. Choo Mi-ae poses for a photo during the main opposition Minjoo Party of Korea's national convention held in Seoul on Aug. 27.(Yonhap)
It marks the first time for the party to elect a female head from the so-called "TK region" comprising Daegu and North Gyeongsang Province, which has traditionally been the ruling Saenuri Party's stronghold.

The lawmaker, however, successfully made reconciliations with politicians of the so-called pro-Roh faction, claiming that participating in the impeachment attempts was the biggest mistake of her career.

Reflecting this, followers of the party's leading presidential hopeful Moon Jae-in, who inherited the Roh faction since his death in 2009, gave full support to Choo, allowing her to win the top party post.

The result is anticipated to give Moon a second chance to run in next year's presidential election and try to recoup his defeat by incumbent President Park Geun-hye. Moon stepped down from the party's top post earlier this year following internal strife.

Political pundits said the result reflects the party members' desire to choose a strong leadership that can unite the party. If other hopefuls won the race, the party could have fallen into a more intense battle to pick presidential candidates, they added.

"Next year's presidential election must focus on the livelihood of the people," Choo said, adding she will now focus her efforts on successfully leading the party down the road.

The result is also set to bring major "progressive-leaning" changes to party policies, including its stance on the deployment of an advanced US missile defense system in the country, they also said.

Choo's predecessor, has maintained a neutral stance against the deployment of the Terminal High Altitude Area Defense system in the country, which bought criticism from some of Minjoo's progressive lawmakers.

Choo earlier vowed she will take a tougher stance in regards to THAAD.

The move will also apparently further weigh down the party's relationship with the conservative ruling Saenuri Party, which claims the missile defense system is integral to defending South Korea against Pyongyang's evolving nuclear and missile threats.

Pundits said Choo, however, is anticipated to face challenges down the road due to her history of supporting the move to impeach Roh, which is considered as "unpardonable" for some liberal officials.

Her background as being born in the right-leaning region of Daegu, on the other hand, can help Minjoo gain groundin the conservative southeastern part of the country, they added.