ULAANBAATAR -- President Park Geun-hye on Saturday pointed to North Korea as a "missing link" in the effort to achieve a free, peaceful and interconnected Eurasia, saying the unification of the Korean Peninsula will offer a "fundamental" solution. 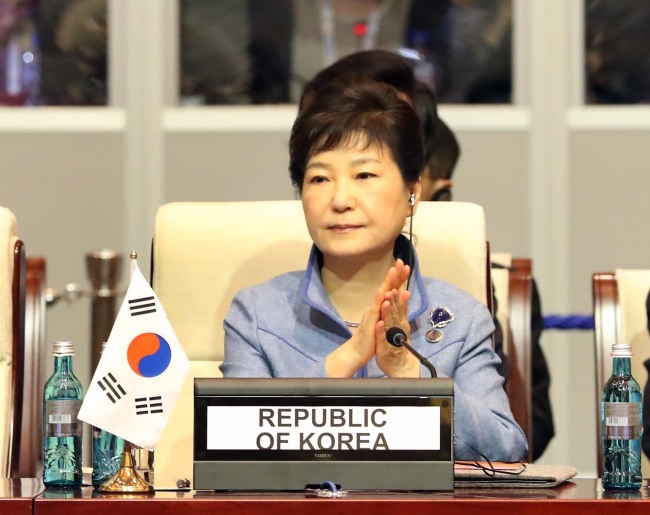 President Park Geun-hye at the ASEM opening ceremony on Friday. (Yonhap)
Speaking at a retreat session of the Asia-Europe Meeting (ASEM) summit, Park made an emphatic call for international cooperation in Seoul's efforts to lay the groundwork for national reunification.

"The last puzzle that would complete the ASEM's vision to create 'one Eurasia' is the unification of the Korean Peninsula," Park said during the gathering of the top officials from more than 50 countries including China, Russia, Germany and Japan.

"(I) also believe that the unification of the Korean Peninsula is the only fundamental solution to North Korea's human rights violations and nuclear problem," she added, stressing that a unified Korea will be the "starting point" to achieving a nuclear-free world.

Portraying the North as a "completely isolated island" that is veering off from the international trends of freedom and peace, Park upbraided Pyongyang for its constant efforts to develop a nuclear arsenal and other weapons of mass destruction.

"Rather than injecting its scarce resources into improving the livelihoods of its people, North Korea has been pouring them into the development of nuclear arms and ballistic missiles, and has been obsessed with its contradictory policy of (simultaneously) developing nuclear arms and its economy," she said.

Without addressing "North Korea problems," it would be difficult to maximize the potential of cooperation among Asian and European countries, and achieve a "genuine connectivity" between Asia and Europe, the president pointed out.

Since early 2014, less than a year after she took office, Park pushed for preparations for unification as a crucial policy task.

But such efforts have been marred by cross-border tensions stemming from Pyongyang's relentless provocations including nuclear and missile tests.

Pyongyang has watched her drive for unification with great suspicion, arguing that the Park administration is seeking unification by forcibly absorbing the North into a democratic system. (Yonhap)