South Korea near bottom of world survey of air quality

Scoring 45.51 out of 100 in the air quality category, South Korea was one of the poorest performers among Asian countries, according to the EPI survey done by Yale University and Columbia University. The EPI evaluates countries’ performance on high-priority environmental issues based on 20 indicators such as air quality, health impact, climate and energy. The results are announced at the World Economic Forum biannually. 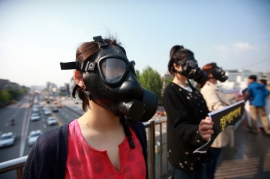 Members of civic groups stage a rally calling for measures to curb fine dust in Seoul on Monday. Yonhap

In terms of average exposure to fine particulate matter such as ultrafine dust, South Korea scored 33.5 out of 100, while China scored 2.26, taking the lowest slot.

A report said that 1.3 billion people exposed to poor air quality lived in East Asian countries, with more than 50 percent of the populations in South Korea and China exposed to dangerous levels of fine dust. In India and Nepal, the percentage was around 75 percent.

European nations dominated the top slots. Finland was the most environmentally sustainable country in the world, followed by Iceland, Sweden, Denmark and Slovenia. Spain, Portugal, Estonia, Malta and France were among the top 10 countries.

Singapore was ranked the highest among Asian countries at 16th place, followed by Japan (39th), Taiwan (39th) and Malaysia (63rd).

“(The) air pollution problem is worse in rapidly developing economies, like China and India, than in wealthy or very poor nations. ... Yet dangerous air pollution is not confined to any one country or group of countries,” said researchers in the report.

According to the EPI 2016 report, about half of the world’s population (3.5 billion people) live in nations where average exposure to fine particulate matter exceeds levels the World Health Organization considers safe at 10 micrograms per cubic meter

The South Korean Environment Ministry, meanwhile, has questioned the credibility of the list, saying different indicators and standards are applied to the indexes between years.

The World Health Organization has been highlighting the health dangers of fine dust. It established an air quality guideline in 1987 to create better awareness. In 2013, the WHO-run institute International Agency for Research on Cancer declared that fine dust is classified as a carcinogenic substance.