South Korea on Friday warned against Pyongyang’s continuous jamming of global positioning systems that it defined as a clear provocation to further escalate cross-border tensions.

“North Korea must immediately stop the dangerous and reckless act that violates a relevant international treaty and threatens people’s safety here,” Cheong Wa Dae said after the meeting of the National Security Council.

The announcement came after the South issued an alert late Thursday afternoon, confirming signs of the North’s radio jamming operations in Seoul and Incheon, as well as Gyeonggi and Gangwon provinces.

This is the North’s fourth attempt to jam radio signals in Seoul since 2010, with the last disruption detected in 2012.

Seoul’s Defense Ministry also warned against the GPS disruption that it said is expected to continue for a while to show off its capability.

“As Pyongyang’s GPS jamming act is a clear provocation that violates the armistice agreement and the rules of the International Telecommunication Union, (Seoul) urges the North to immediately stop it,” the ministry said.

“If it continues the jamming despite the warning, (Seoul) will make sure that it rightly pays for what it did upon close ties with the international community.” 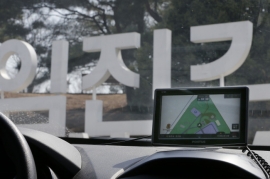 A GPS navigation installed in a vehicle at Imjingak in Paju, Gyeonggi Province, near the border. (Yonhap)

The ministry suspected that the North is attempting to raise tensions by showing off its GPS jamming capability.

As of Friday afternoon, the disruption affected more than 150 airplanes and fishing boats in South Korea, with no significant damage reported. Direct damage to military capability has not yet been detected, Seoul authorities said.

The ministry said North Korea is believed to have more than 10 types of various GPS disruption equipment, with a jamming distance range that reaches 100 kilometers. The technology development level of the North has improved little over the years, but the scope of radio jamming operations has expanded, it added.

The source of the jamming is suspected to be the port city of Haeju, Hwanghae Province and areas around Mount Geumgangsan, military authorities said.

It was speculated that a unit under Pyongyang’s Reconnaissance General Bureau, which is in charge of espionage operations against Seoul and cyber warfare, might have controlled the latest move.

The Defense Ministry, however, refused to confirm the theory, citing military intelligence.

Meanwhile, President Park Geun-hye in Washington on Thursday stressed the importance of tighter cooperation among the international community against the North’s persistent provocations.

“As much as the nuclear terrorism threats evolve, the countermeasures should be preemptive and creative upon strengthened cooperation of the international community. (The countries) should actively take action against threats involving new technology, such as cyber attacks against nuclear power plant control systems, or dissemination of radioactive substances through drones,” said Park at a working dinner for the Nuclear Security Summit in Washington.

The South Korean government has been moving to enact a law on fighting cyberterrorism threats, in addition to the antiterrorism law that was endorsed by the National Assembly on March 2. The anti-cyberterrorism act, designed to strengthen the intelligence agency’s control of information, has been opposed by progressives under fears of privacy violation.