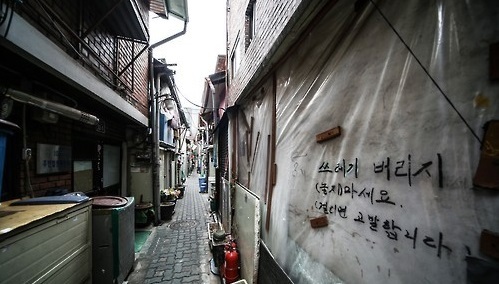 Yonhap
The proportion of South Korean households with breadwinners aged 34 or under who live below the poverty line increased from 2006 to 2014, an indication that the nation’s welfare programs may have been ineffective, a study showed Sunday.

The report, written and published by the Korea Institute for Health and Social Affairs, showed that the proportion of Korean households with breadwinners aged 65 or older who live in poverty also increased over the same time period.

“The slow economy worldwide and intensified competition are making many Koreans vulnerable to poverty,” researchers wrote in the report.

Researchers pointed out that it is particularly alarming that more young Koreans are living below the poverty line -- defined as having income of less than half the respective median national income. Amid a sluggish global economy, the youth unemployment rate here peaked at 9.2 percent last year, according to the Ministry of Employment and Labor.

The KIHASA report found that from 2006 to 2014, the market income of the poorest 10 percent of the Korean population continually declined, with an average annual decrease of 4 percent. The study also stressed that the nation’s relative poverty rate based on income before taxes and social security payments increased from 17.6 percent to 17.9 percent from 2012-2014.

However, the proportion of Koreans who receive the basic living allowance -- given to households whose income is less than what the government has designated as the minimum cost of living -- which is 1.63 million won ($1,310) for a four-person family -- in fact dropped from 2.79 percent to 2.64 percent in the same period.

The Welfare Ministry has been making continuous efforts to combat poverty in recent years. Starting last year, impoverished people were eligible for full welfare payments if their children or spouses made 4.04 million won a month or less.

Previously, all adult Koreans were legally obligated to financially support their spouses, parents and parents-in-law, and welfare recipients lost a portion or all of their allowance if they had a spouse, child, or child-in-law with an income, depending on how much they made.

Last year, a report released by the World Economic Forum showed that South Korea’s tax and transfer systems -- such as unemployment benefits and social retirement benefits -- have been failing to substantially reduce inequality.