They will be part of Seoul Players’ Ten Minute Play Festival, which runs for two weekends starting Friday.

The festival, now in its fifth year, will feature 16 plays chosen from over 200 submissions from Korea and overseas.

Festival coproducer Sarah Grover said that whittling them down was tough, but she was impressed by the local submissions, four of which made the cut.

“I think the writing community has grown a lot more, so there’s more people taking chances,” she said. “So we have more of an opportunity to facilitate local plays.”

She was also pleased to see a more unconventional set of plays this year.

“Last year we had a lot of good plays that were more regular dramas. I think this year we have a lot that are a little quirkier.”

The festival usually has a good number of comedies, as these tend to be a hit with the audience. 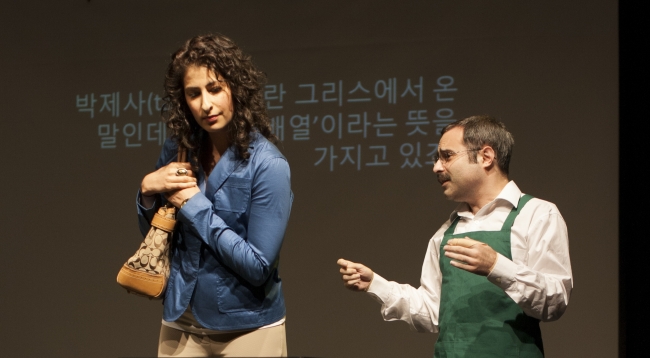 But Grover said the festival had an edgier feel to it this year.

“We didn’t try to stick to any one genre. This year I feel like we have a good few dark comedies that I don’t think would have made it last year, and some dark dramas, too,” said Grover.

“A lot of our writers were writing about darker things, they have darker influences in terms of what’s in the media and the things that we are seeing around us.”

While some submissions were rejected because they demanded too much in terms of scene changes and other technical demands, Grover said this year’s troupe has upped its game in terms of technical provisions.

The plays will be performed over two nights on Friday and Saturday, with an audience vote deciding which four from each night will go through to the final.

The last round will be held the following Saturday and judged by a panel. Prizes will go to the best directors, actors and playwrights.

Tickets for all shows are 15,000 won ($13). Email ticketing@seoulplayers.com for reservations and inquiries.