[ The Korea Herald – Send E-mail ]
Korean adoptees struggle for records access
Bureaucracy at state adoption agency hinders searches
By 이다영
Published : Nov 3, 2015 - 18:55
Updated : Nov 3, 2015 - 18:56
When Annie Kim was 15, she was convinced that popular Korean actress Lee Young-ae was her birth mother after watching the famous TV drama series “Dae Jang Geum.” The Korean adoptee would gaze at photographs of the actress, secretly hoping to meet her one day.

Born in 1988 and adopted by a U.S. couple at age 1, Kim arrived in South Korea last year in hopes of finding her birth parents.

Kim finally began her search in Korea as an adult, but the process was far from easy. A visit to the Korea Adoption Services, which offers birth family search services for adoptees, was disheartening as officials there told her she wasn’t allowed to see any information about her birth family without their consent. They told her a telegram had been mailed to her mother, and only if she agrees, Kim would be able to meet her in person.

Kim is one of many Korean adoptees demanding a revision of the current Special Adoption Law, which they argue prevents them from accessing their records and finding birth families. “Finding our families and knowing our histories shouldn’t depend on accident or luck,” Kim said at a recent forum at the National Assembly in Seoul. 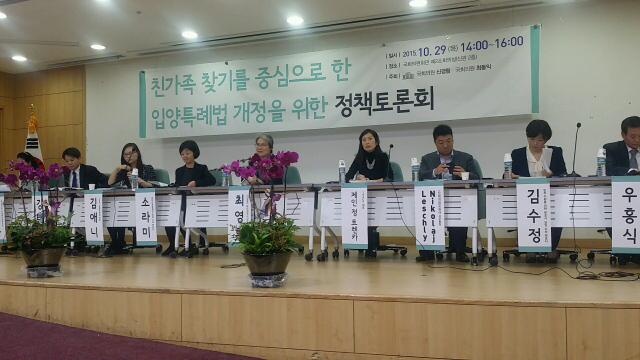 Korean adoptees, lawyers and public servants attend a forum discussing the ways to improve the current Special Adoption Law at the National Assembly on Oct. 29. Rep. Choi Dong-ic’s office
If Kim had not asked for the paper receipt for the telegram, she may have never been able to reunite with her mother. The agency had blackened the recipient’s tracking code on the receipt, but Kim traced it by holding it against a bus window.

When Kim finally met her mother by showing up at her place, she realized her mother in fact had been searching for her, too. Her mother had replied to the telegram sent from the KAS asking for further clarification, but got no response from them. The agency had been telling Kim they did not hear back from her mother.

Since the KAS was established in 2012 upon the revision of the adoption law, the number of adoptees asking for their personal records to find their birth families has increased dramatically. While 258 adoptees asked to see their information in 2012, 1,654 have done the same this year as of August.

In total, 4,790 adoptees requested their records to find their birth parents from 2012-2015, but only 14.7 percent of them were able to reunite with their families, according to data released by New Politics Alliance for Democracy Rep. Lee Jong-kul.

Although the law aims to protect children’s rights, the way the KAS interprets some of its articles has made it almost impossible for returning adoptees to see their records, adoptees argued. According to the law, one can access their birth records without their birth parents’ permission only if the birth parent is dead or cannot be found, or the adoptee has a medical condition or other reason for doing so.

Jane Jeong Trenka, an adoptee and president of the Truth and Reconciliation for the Adoption Community of Korea, said the KAS was applying the clauses too strictly by telling adoptees that they could only receive they personal records if all three criteria are met.

“We believe that this is unreasonable, and this was certainly not our intention,” she said, referring to her organization’s input and support in amending the law three years ago. One of the major changes stipulated by the act was that all children must have a complete birth registration here before being put forward for adoption.

Because meeting all three criteria at the same time is practically impossible, many adoptees would spend years simply tracing their birth parents.

Hanna Johansson, an adoptee in Sweden, has visited Korea six times since 2007 in search of her birth family. The trips have cost her about $15,000, but she has yet to find any relatives.

It has been an arduous journey. She began her search from the papers from the Social Welfare Society, the Korean agency that was in charge of her adoption in 1976. The papers said she was an orphan. It was only in 2010 when Johansson discovered that she was found by a police officer in Seoul’s Wangsimni area and was taken to a hospital before being adopted without any records of her birth parents.

In 2013, she realized that perhaps the most crucial information had been kept from her -- the name of the police officer who had found her. While the name was included in the file shown to her in 2010 by SWS, it was written in Chinese characters. She learned it was the name of the officer after sharing the documents with Trenka. Johansson was finally able to meet the police officer after sending the KAS about 50 emails.

“I think SWS never thought the adoptees would return to search,” Johansson told The Korea Herald. “I think they just do not care if we can get the information or not.” 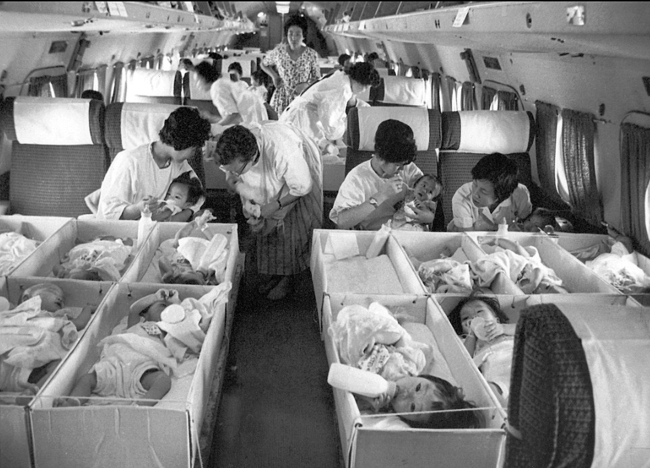 South Korean babies are being sent to the U.S. via plane to be adopted in 1956.Yonhap
Government statistics show that the current system, particularly the process of contacting the birth parents through telegrams instead of text messages or phone calls, is proving ineffective.

According to data released by NPAD Rep. Choi Dong-ic, the KAS sent a total of 2,301 telegrams to birth parents between January 2012 and August 2015. Of them, 705 agreed to have their information revealed, while 1,596 did not respond or wished to remain anonymous.

Currently, the KAS interprets a non-response from the birth parent as not agreeing to disclose their information. Consequently, 91 percent of 1,391 birth parents who did not give consent for their information to be disclosed from January 2014 until August this year were actually those who never replied.

During the forum, Trenka pointed out that there is no way for adoptees to even confirm that these telegrams were even sent, and verify if the right birth parent received them. Trenka and lawyer So Ra-mi also argued that many birth parents would mistake the telegrams as junk mail even if they received them, as some of them simply say “a foreigner is looking to find you,” without informing that the person is an adoptee.

South Korea remains one of the largest exporters of overseas adoptees in the world, having sent about 200,000 children abroad over the past six decades. About 90 percent of Korean adoptees are born to unwed, single mothers, who are vulnerable to social discrimination and stigmatization here.

Woo Hong-sik from the KAS said this is why telegrams are being sent when contacting birth parents, instead of calling or visiting them in person.

“Birth mothers who have been remarried (after sending their child overseas for adoption) often keep their past a secret,” he said. “A birth mother may not want their current family to find out that she’s had a child as an unwed woman in the past. Revealing that information could severely affect her relationship with her current family.”

However, Kang Tae-in, a representative of a group of Korean birth families, said it was untrue that most birth parents don’t want to be found. He said many members of his group have tried to search for their children, only to be insulted and lied to by adoption agencies.

One of the members was told, “You gave up on her. What makes you qualified to search for her now?” when he visited the agency that was in charge of his daughter’s adoption to Denmark. The father was also told that according to Danish laws, birth parents cannot contact their adopted children unless the adoptee contacts them first. However, the father later found out that Denmark has no such laws.

Lawyer So Ra-mi said the current system goes against Article 7 of the United Nations Convention on the Rights of the Child, which stipulates that the child “shall have the right to acquire a nationality and, as far as possible, the right to know and be cared for by his or her parents.”

For another adoptee, Andrea Kim Cavicchi, locating her birth mother’s burial site involved posting flyers, knocking on the door of every house and visiting three other villages where her mother may have lived, all on her own. She had been reunited with her maternal aunt in 2006 after appearing on a TV show in Korea. Her aunt informed Cavicchi that her mother had passed away, but refused to share any other information.

When Cavicchi asked the KAS to persuade her adoption agency, Holt, to hand over her file to help her locate the grave site, the KAS refused, saying she did not have a medical condition, one of the three requirements to access her records.

While Cavicchi managed to locate the site without any organizational support, the adoption agency told her to be “grateful” that she was adopted because she would have been stigmatized for having a single mother who was mentally challenged had she stayed in Korea. She said the most painful part of the search was a deep sense of hopelessness.

“(The painful part was) knowing I’ll never find answers to some questions. … What made my mother laugh? What did her voice sound like? What was her favorite food?” she told The Korea Herald.

Cavicchi reached closure when she finally found her mother’s grave site. She learned that her mother remarried after Cavicchi was sent away, and that she was 27 when she died. But Cavicchi said the feeling of “han” remains, referring to a Korean word describing a sense of unresolved resentment against injustices suffered.

“We will never physically meet in this lifetime, Mom, but I want you to know that I am fighting for you,” she wrote in her article titled “Dear Eomma (mom)” published last year. “I embody your han.”