“I’m worried about my baby,” said Ahn, who expects to deliver her child next month. “I get stressed and anxious whenever I sit on a priority seat on the subway. I’m constantly worried about being attacked by the elderly.”

Throughout her pregnancy, Ahn ― staggering to hold balance with her burgeoning belly and swollen feet ― has faced a number of uncomfortable situations while taking public transportation. People would hardly give up their seats. The recently-introduced special seats for pregnant women were rarely available, mostly occupied by nonchalant commuters of all ages. A number of times she even wore a name tag that said “Pregnant ladies first,” distributed by the government, but people hardly noticed it.

There were of course, the “general priority seats,” which are allocated at each train compartment’s farthest ends. These general priority seats are theoretically accessible to anyone who is “vulnerable” ― the elderly, people with disabilities, the injured, and pregnant women. They, too, have not been of much help, Ahn said. They were almost at all times occupied by the elderly, and whenever she secured one for herself, Ahn was often verbally attacked by senior citizens.

“You are such a young woman. What on earth are you doing here?” an elderly man once scolded her. “You should get up and leave.” 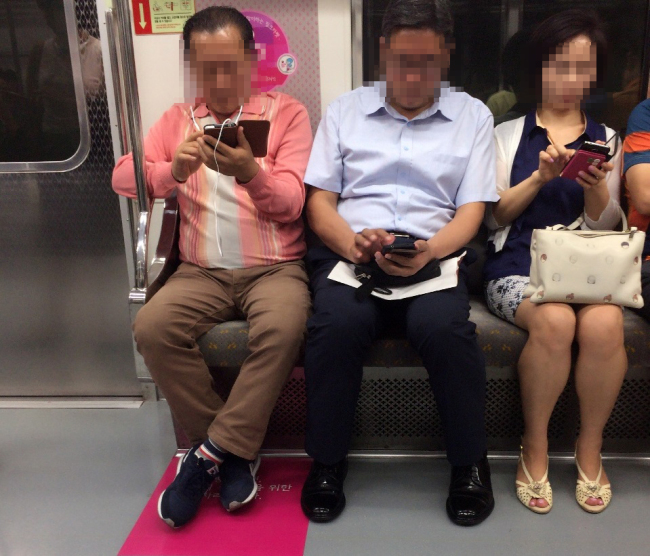 A priority seat designated for pregnant women (marked in pink) is occupied by a non-pregnant passenger in a Seoul subway train. (Claire Lee/The Korea Herald)
Hierarchy among the ‘vulnerable’

Ahn’s story is not rare in today’s South Korea, where the fertility rate is critically low while the aging population is surging dramatically. Earlier this month, a pregnant woman was physically attacked by an elderly man who was angry at her for sitting on a priority seat, which he thought should be exclusive for senior citizens.

In spite of the newly introduced priority seats for pregnant women only, it is still difficult for those with special needs to travel comfortably ― and safely ― because of the legacy of traditional ideologies that often discriminate against the young and women, experts said.

“When you think about it, there is a hierarchy among the ‘vulnerable’ in public transportation, and it’s greatly affected by the traditional values that prioritize the well-being of the elderly,” said Lee Soo-yeon, a researcher at the Korea Women’s Development Institute.

“Most people don’t question that the elderly deserve the priority seats. Their needs are generally recognized by the public. But pregnant women’s needs are often ignored. When they sit on the priority seats ― which they fully deserve ― they often get yelled at by senior citizens. And people hardly offer their seats for them, especially those in the early stage of pregnancy because they don’t ‘look’ pregnant.”

The Korean government first introduced the priority seats back in 1985, five years after its first subway line ― today’s Seoul Subway Line 1 ― opened in 1980. In 2013 the Welfare Ministry announced that it would designate separate and exclusive seats for pregnant women, after receiving “many and continuous” complaints.

It wouldn’t disclose the exact figures but said they were from “women who have been harassed by the elderly for sitting on priority seats.” The 62 million won project was part of the government’s plan to boost the nation’s low fertility rate, which currently stands at 1.21 children per women.

It also started giving out a special nametag, that says “Pregnant ladies first,” to pregnant women, so they can wear it to prove that they are in fact pregnant while sitting on the priority seats.

“We thought it was the most realistic solution to the problem,” said Min Seung-cheol from the Welfare Ministry when asked if the government ever considered educating the public instead of the purpose of the priority seats beyond the benefits of the elderly.

“The public perception doesn’t easily change. It takes time. We needed to do something that would improve the situation right away.”

‘I take cabs instead’

In July, the Seoul Metropolitan Government announced that it decided to change the color of reserved seats for pregnant women to bright pink, so that more passengers would recognize and choose to save them for expectant mothers. The city government is spending 460 million won for the project, without any support from the central government, according to Choi Jeong-yoon from the SMG.

But Ahn Ji-young said the seats were hardly empty in spite of the color change, and her name tag did not help much, either. “No one really knew what it was,” she said. “It’s hard having a baby in this country,” she let out.

The Korea Herald monitored two seats of a subway exclusively reserved for expectant moms for a week, during a total of 10 subway rides from the Gwanghwamun Station to Haengdang Station in Seoul, mostly during rush hour. During the entire ride, women were able to take the seats only a total of four times. (It was not confirmed whether the women were pregnant.) On the contrary, many of the general priority seats were often left empty even during the most crowded hours, with people opting not to seat at all, rather than risk sitting there that otherwise were occupied by the seniors only.

“The general perception is that, you are either a horrible or at least ill-mannered person if you mistreat an elderly or take the priority seats ― which are I think the de-facto exclusive seats just for the elderly,” said Jang Yeon-ji, a 29-year-old woman who is currently seven months pregnant. “But most people, including young women, don’t think the same way about treating women with special needs, or taking seats designated for pregnant women.”

While suffering from her morning sickness, Jang very often chose to take a cab to commute to and from work instead, feeling unsafe in public transportation as she feels she cannot stand up throughout her 45-minute ride. Like Ahn, Jang was also scolded by an elderly man who demanded she give up her seat for him. Jang said she was aware of the name tag, but chose not to get it.

“The idea was just kind of embarrassing,” she said. “To wear the name tag and ask people to offer their seats. I just wouldn’t find it comfortable doing that. At the end of the day, I didn’t want to risk anything. I didn’t want to be stressed, to worry about not being able to sit down or the possibility of being scolded by the elderly.” 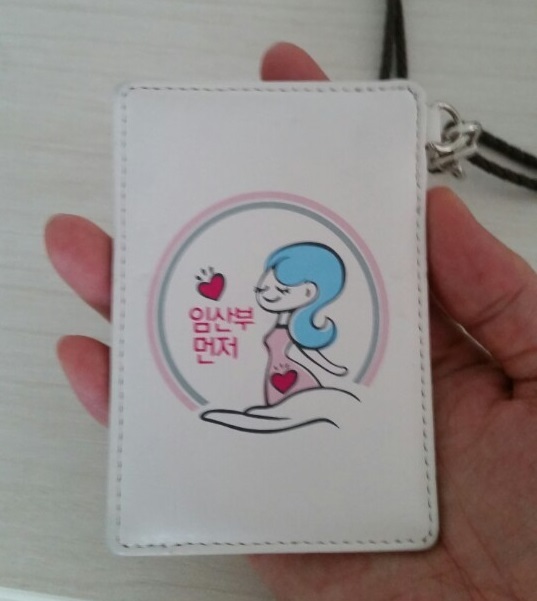 As of this year, there are some 6.62 million senior citizens ― those aged 65 or older ― living in South Korea. They account for 13.1 percent of the entire Korean population. With the country’s low fertility rate, coupled with the high ratio of baby boomers entering retirement age, Statistics Korea expects that the elderly will make up 15.7 percent of the population in 2020 and 40 percent by 2060.

Korea’s rapid industrialization and economic development since the 1950s made each generation’s collective experience dramatically different from one another.

Professor Lee Geum-ryong from Sangmyung University, whose research focuses on welfare programs for the elderly, said one of the key traits of the Korean elderly, which makes them different from the rest of the population, is their tumultuous life experience.

“I think the problematic behavior by elderly citizens in public places has to do with their life experiences enduring extreme poverty and the war, coupled with comparatively low education levels,” Lee said.

“Their values and priorities focused on basic survival and supporting themselves and their families. Life was harsh for them. While many thought it was their duty to sacrifice for their children, they didn’t get to learn about how to be tolerant of those who don’t belong to their family, or how to embrace new or different ideas.”

Kwak Geum-ju, a psychology professor at Seoul National University, said such behavior by many elderly has to do with their sense of isolation.

“Self-control helps people to solve motivational conflicts. It’s not uncommon for people to become more impulsive as they age,” she said.

“But on top of that, I think many Korean senior citizens think they are unappreciated and isolated in the society, that everything is focused on the interests of those who are younger. I think it has to do with how fast our society has changed. Today’s Korea is very different from the one they experienced when they were younger. Such a sense of isolation can come out in the form of violence when their emotional and other needs are not met.”

And according to the statistics, elderly Koreans aren’t happy. As of 2011, 48.6 percent of Korean senior citizens live below the poverty line, the highest rate among the OECD countries. A growing number of them are living alone, while 80 percent of them are known to spend their leisure time alone watching TV.

According to government data, only 7.8 percent of the Korean elderly received higher education as of last year. A total of 62.5 percent of them either only attended elementary school or never received any education at all.

‘We are wasting resources’

But nothing can justify pregnant women feeling unsafe in public transportation, according to experts. Some critics also pointed out that the current system ― in which the general priority seats serve as de facto reserved seats for the elderly ― is a waste of tax money and resources.

While the elderly are basically given two options of taking an ordinary seat or the priority seat, a younger traveler is automatically given only one choice of the ordinary seat, a scholar pointed out, wishing to remain unnamed.

“If the elderly chooses to sit on the nonpriority seat, instead of the priority seat, then one seat is being wasted. This is a waste ― the public transportation should benefit as many people as possible.

In spite of the government’s 81 trillion won investment in demographic policies to boost the fertility rate since 2006, it has fallen to its lowest ever level in recent years.

Paik Young-gyung, an anthropology professor at Korea National Open University, said that current policies failed to support women from all socioeconomic backgrounds and were not conscious of how pregnancies can in fact make women vulnerable to stigmatization according to their age, financial situation or marital status.

“You are lucky if you are pregnant and you can wear the name tag in public,” she said.

She explained women with less “fortunate” circumstances, such as unwed women, pregnant teenagers, or a contract workers who may be fired should their bosses found out they are pregnant, were all overlooked in such policies.

“When you think about the policies evolving around women and their pregnancies, even these tags can really only benefit those who are married with relatively enough resources to have children.”

Kim Ha-young, a 32-year-old Seoulite was once stunned by what an elderly man said to a fellow female passenger while on a bus. The woman in her 20s was sitting down with a lot of bags to carry, and did not offer her seat when an elderly lady stepped onto the vehicle. While the senior lady did not say anything, the man, who was sitting behind the young woman, started scolding her for not giving up her seat.

“Young women these days have no manners!” Kim remembered him saying, who continued to blurt out remarks that were borderline criminal for being insulting, generalizing and simply wrong.

“Oh, maybe it’s because university students sleep around these days and get pregnant. I assume she’s pregnant?” the man said. But the man’s slur went unreported, as the young woman chose to stay silent for fear of stoking even further humiliation.