China’s No. 1 mobile antivirus application developer 360 Security Group has been ramping up its marketing efforts in earnest in South Korea, which the company said would serve as a test for businesses in other Asian markets.

The 360 Security Group launched the antivirus and memory boosting application, dubbed 360 Security, in 2013 and the mobile app has garnered worldwide popularity with the number of downloads on Google’s app market crossing 200 million, including 5 million in South Korea, so far.

Most services provided through the app, such as memory scanning and cleaning and virus detection and removal, are free of charge and can be used with just one or two taps on a smartphone screen. 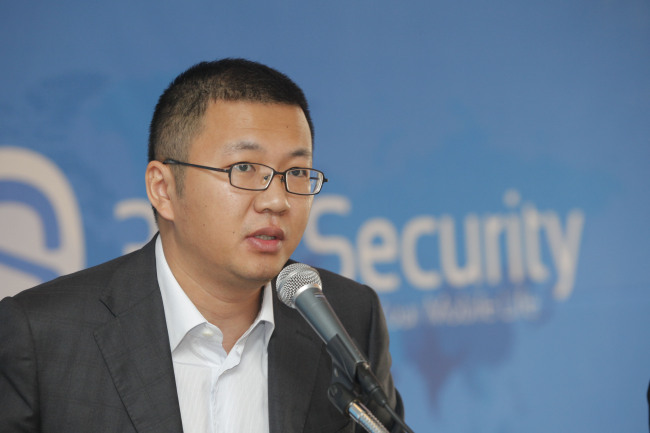 “Security 360 has been, and will be, focusing on understanding mobile users and how to improve problems nagging the users. So I believe we can win in competition with rivals,” Yan Huang told The Korea Herald in an interview last week.

In order to get ahead of other rivals and increase the user base, the COO said the company would stick to the free-of-charge policy without compromising the quality of service.

“We will continue to have better functions featured on the app to satisfy our users,” he said.

He said the South Korean market, which boasts a fast mobile network environment and high smartphone penetration rate, is especially important since it will serve as a springboard for success in other global markets.

“Aiming to surpass 500 million users within this year, increasing the company’s foothold in mature markets such as Korea is significant,” he said.

Security 360 will be trying to work together with local smartphone manufacturers Samsung Electronics and LG Electronics and PC and mobile security firm AhnLab, he added.

Executives from the Chinese firm and LG are said to have had meetings. Officials from 360 Security Group also meet up with AhnLab officials at global security trade shows to discuss future partnerships.

The COO declined to disclose the details of the talks, but said that the results of possible collaboration with the Korean device-makers could include smartphones preinstalled with 360 Security Group’s apps.

“Future collaboration with Korean firms will likely be conducted in comprehensive ways,” he said.

He added that the Chinese company would also seek growth opportunities in the security sector for the rising “Internet of Things,” Internet-connected products.